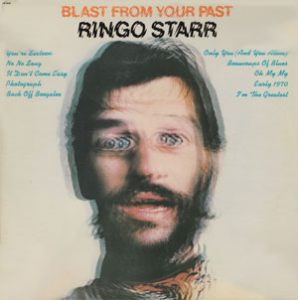 Kronomyth 5.0: FIVE GOLDEN RINGOS. Every time I think of this album, I see red. Not because of the music; you couldn’t find a friendlier collection. It’s that red Apple label. It’s just… unnatural. Anyway, nuff bout that. This is the first official greatest hits album from Ringo, released around the same time as Shaved Fish and followed by The Best of George Harrison and, later, Wings Greatest. If memory serves, all of these were released around the holidays (jingle bells, jingle bells, jingle all the way to the bank). Ringo’s roundup includes “Back Off Boogaloo” and both sides of the “It Don’t Come Easy” single, so collectors should be happy. And, of course, there are the real honest-to-goodness hits: “Photograph,” “Oh My My,” “No No Song,” “You’re Sixteen.” Probably all of the Ringo Starr you’ll ever need. If you demand more, there’s “Only You” and “Beaucoups of Blues.” Apple even thought enough to toss in a great album track, “I’m The Greatest,” from a certain feller named John. Is ten songs a little chintzy? Maybe. But what a wonderful world we live in where you can ask if Ringo’s oeuvre is underrepresented. (Oeuvre, under, get it? Of course you do.) To date, none of the other compilations (and pity Starr Struck for getting stuck with what came after) hold a candle to this Blast. In fact, I’d even give this the nod over Shaved Fish (take that, “Cold Turkey”) and The Best of George (as if I needed someone to remind me). Could it clip Wings Greatest? Well, let’s not get carried away. After all, we’d need to sweep “Back Off Boogaloo,” “Early 1970” and “Beaucoups of Blues” under the carpet first. But this record is more than Ringo’s best, it’s what best about Ringo. The limited voice, the lovable oldies, the laudable originals, Ringo was the real dark horse of the group. If you haven’t heard these songs in a while, giddyup and get ‘em here.