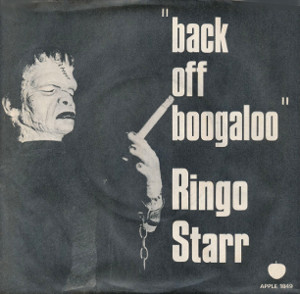 “I sat down with Marc Bolan one night and he’s using this ‘Back off, boogaloo’ kind of language. I went to bed and I woke up with this song in my head, ‘Back off boogaloo, what d’ya think you’re gonna do.’” – Ringo Starr as quoted in Keith Badman’s The Beatles: The Dream Is Over – Off The Record 2.

Ringo took a greater interest in film after The Beatles, appearing both in front of and behind the camera as an actor (“200 Motels,” “Blindman”) and director (the T. Rex concert film, “Born To Boogie”). This single is sort of the musical soundtrack to that moment, featuring the Bolan-inspired “Back Off Boogaloo” on the A side and, fittingly, his song from the B movie “Blindman” on the flip side. The enthusiasm for “Back Off Boogaloo” owes much to Beatlemania; outside of Ringo’s stellar drumming (the song’s best feature), it’s pretty forgettable. (A film short was made to accompany it, featuring Ringo and a man dressed as Frankenstein’s monster. If Ringo has any acting ability, he hides it well for three minutes.) “Blindman” is interesting as Ringo’s interpretation of the spaghetti western scores popularized by Ennio Morricone, fused with a country song. While it’s tempting to re-appraise Ringo’s work as better than it really was, I don’t believe he released a decent record until Ringo and have yet to see a film where I would refer to Ringo as an “actor” without wincing a bit.