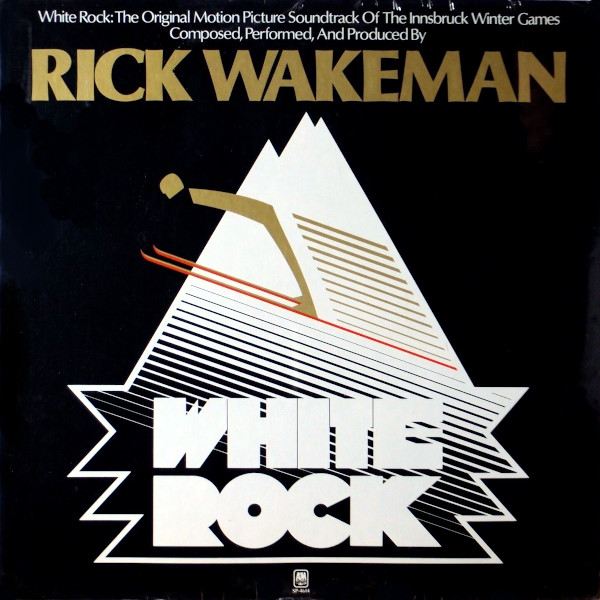 Wakeman’s score to a film of the 1976 Winter Olympics is as cool as you’d expect.

Snow easy feat to write engaging program music for a sports event, but if Rick Wakeman could dispatch six wives, a king and the Earth’s core, how much trouble could a movie and some moguls give him? White Rock was conceived as a marriage of video and music to celebrate the 1976 Winter Olympics at Innsbruck, a forerunner of the “natural” videos that Tangerine Dream and others would release in later years. The instrumental compositions from Wakeman are purportedly inspired by film footage of various events (“Ice Run,” “The Shoot”), which always struck me as a lame source of inspiration. But he doesn’t take the challenge at face value, instead writing the same sort of keyboard compositions that turned up on Six Wives and Criminal Record.

The music isn’t as complex as those works, as Wakeman doesn’t have the English Rock Ensemble to support him. (Crickets.) So he multitracks piano, Moog, mellotron, pipe organ and more into a modest tapestry of moods while Tony Fernandez provides percussion. The result is surprisingly solid, at various times sounding like the work of Keith Emerson (the opening “White Rock”), Yes (“The Shoot”), Camel (“Searching For Gold”) and, of course, Rick Wakeman.

I couldn’t make a case for this record over the acknowledged masterworks (Wives, Journey, Myths), but White Rock belongs to Wakeman’s most fertile creative period and should not be shunned as incidental music to a film nobody remembers. In fact, best not to look at this as a soundtrack at all, since it functions very well as instrumental music independent of the film. Tellingly, Wakeman has revisited some of these compositions over the years, and fans should give White Rock the same warm reception when approaching his catalog.

All tracks written, composed and arranged by Rick Wakeman.