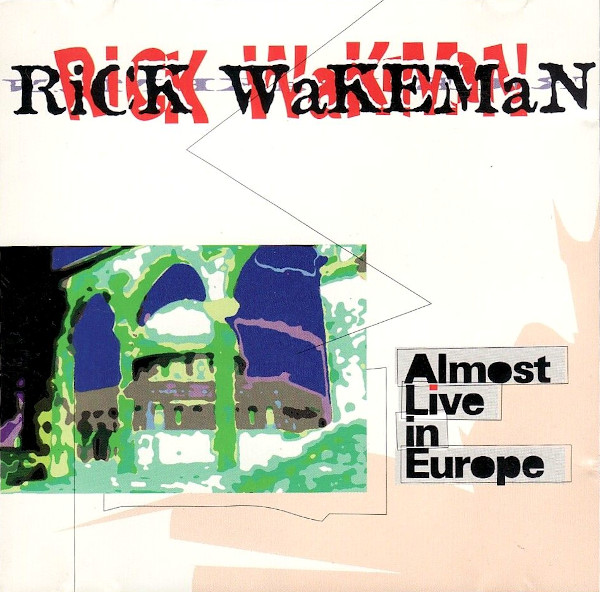 A live performance from the 80s with a skeleton crew of bass, drums and the incomparable Ashley Holt.

This thing has more aliases than Sean Combs: Almost Live In Europe (the original and, by far, most accurate of the titles), Rock & Pop Legend and the most heinous version (which is the one I got suckered into), The Best of Rick Wakeman. In their defense, the labels did use a lowercase “b” for “best,” perhaps a subconscious concession that, no, this isn’t really the best he has to offer. And it isn’t, by a long shot. What it is, is a live performance recorded in Europe (it doesn’t really matter where, since those countries change their names as often as Sean Combs—wait, have I used that already?) and featuring some overdubs. My guess is that Rick Wakeman added an extra post-performance keyboard track on some of the songs, and it’s logical that Davy Paton added the guitar tracks after the fact as well.

The selection is a little unusual, particularly the leadoff track: “Elizabethan Rock/Make Me A Woman.” This comes from The Time Machine, not exactly one of Wakeman’s most beloved records, so it may help us to carbon date this around 1988. The synth sounds here hardly evoke greatness, and Ashley Holt is his usual canary-killing self (i.e., his vocals tend to suck the air out of a room). However, I’ll give Holt this: even Adam didn’t have a pair of apples big enough to sing the lyric “Make Me A Woman” over and over in some stentorian monotone. (“Make him shut up!” the troll lamented).

That unpleasantness out of the way, selections from Six Wives prove unsinkable in the “After Henry” medley, with one exception: sandwiched between them is “A Crying Heart,” which I’ve never heard before. Imagine the theme to “Love Boat” moored in “Margaritaville,” and you’re close. Really, I’m not trying to be funny; those are the two songs that come to mind. Not to pick on Ashley Holt all the time, but there are moments when I’m convinced his voice could drive rats from an abandoned cheese factory.

“The Realisation/The Prisoner” is the only consistent ride on here, and (as way of atonement) I’ll note that Ashley sounds great here, almost Byronic (for those who enjoyed the late Heepster’s vocal acrobatics). The closing “King Arthur” suite is a little disappointing, having been served so much better on the King Biscuit disc (which is superior in all ways). I’ve seen Rick Wakeman live in the ‘90s (with his son, Adam), and he’s eminently capable of putting on a great show, but this one lacks the requisite electricity to spark even a fan’s interest.

All titles written and composed by Rick Wakeman.

Cover design (for The best of Rick Wakeman) by Studio van Dijken.