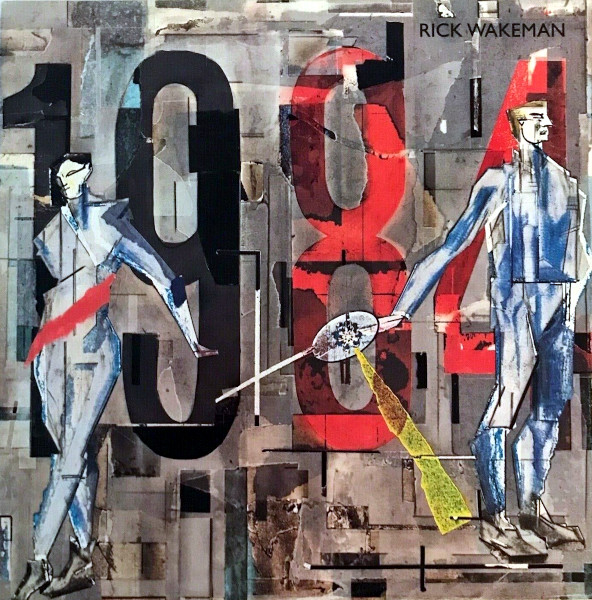 Orwell’s nightmarish vision of the future gets a spiffy new score from Wakeman and Tim Rice, with guest vocals from Chaka Khan.

George Orwell’s novel has been the source of some very good music over the years, from David Bowie to the Dead Kennedys. As I’ve mentioned before (somewhere, I’m sure), 1980 was a wake-up call that the future we’d feared was fast approaching. You’ll hear that fear in the forward-looking music of Scary Monsters, Peter Gabriel III and Remain In Light. Even Anthony Phillips seems to have gotten the memo that the future had arrived.

Rick Wakeman’s 1984, however, is a throwback to the symphonic rock of the past. Written with lyricist Tim Rice and featuring an impressive cast of vocalists (Chaka Khan, Jon Anderson, Steve Harley), Wakeman’s latest literary opus is a mixed success. It feels like one of those failed Pete Townshend concept albums much of the time: wordy, while the story gets lost in the retelling. The music itself isn’t far removed from Rick’s more recent albums (Criminal Record, No Earthly Connection) and, despite some dated keyboard sounds that reveal the limitations of the technology, fans should find the dropoff in quality slight.

“I was having terrible trouble because I wanted to replace a lot of my instruments—I knew some of the sounds I wanted and I’d ordered a lot of new stuff from Korg, but it didn’t come in time for the album.” – Rick Wakeman, from an in-depth interview that originally appeared in the December 1981 issue of Electronics & Music Maker.

The idea of Rick Wakeman and Tim Rice collaborating on a musical concept album about 1984 will be too tantalizing for some, even as they scratch their heads at the pairing. You might want to keep the head scratcher handy for the songs featuring Chaka Khan, who appears here as a kind of poor man’s Tina Turner. (In her defense, I think Chaka Khan does the best she can with the material, I just feel she’s an odd choice for the principal voice in the play.) Surely, as someone who championed (or at least defended) Lisztomania, I can’t fault 1984 for its excesses. I do have the sense, though, that Wakeman’s work had become largely templatized at this stage in his career: find a concept to rally around compositionally, bust the budget on the biggest band you can afford and dazzle the audience with keyboard fireworks. I’m not saying it’s a bad formula, I just don’t know how sustainable it had become for Wakeman.