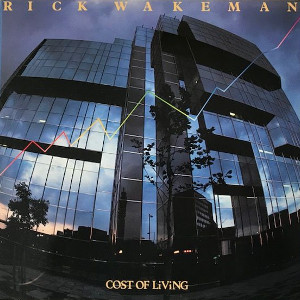 Kronomyth 13.0: $19.84. A second collaboration with Tim Rice, Cost of Living, yielded a handful of songs interspersed with instrumentals that find Wakeman again out of his element in the electronic Eighties. It’s not a bad record any more than 1984 or Rock ‘n’ Roll Prophet were bad albums, with nods to Wakeman’s classic literary work in the tasteful narration of Thomas Gray’s “Elegy,” now set to music, and the instrumental “Shakespeare Run” with its shades of Six Wives. Unlike 1984, there is no unifying theme at work on Cost of Living. Wakeman manages to cobble together a pretty decent band for the occasion that includes former members of Café Society, Roxy Music, Strawbs and Them; maybe not Muscle Shoals, but they get the job done and vocalist Hereward Kaye is an improvement over Ashley Holt. Like many proggers, Wakeman was at a creative crossroads in the 1980s, on the one hand playing to the faithful with excessive arrangements (almost nine minutes of narration and music was akin to artistic suicide in the post-punk world) while on the other parlaying his keen sense of melody and clever wordplay into synth-pop. The biting social commentary of “Monkey Nuts” or “Happening Man” was over the heads of most listeners, so you have to wonder who Wakeman was writing for at this point: proggers with a newfound penchant for pop muzik perhaps, or new wavers with old souls. Cost of Living isn’t up to the high standards of No Earthly Connection, but it’s in line with the other Charisma efforts, which don’t lack for charisma and present Wakeman’s grandiose ideas on a more modest scale, often in a pop format. It ain’t Asia, but it’s a living.

The Pictures
Sleeve design by The Artful Dodgers. Photography by Roger Childs.