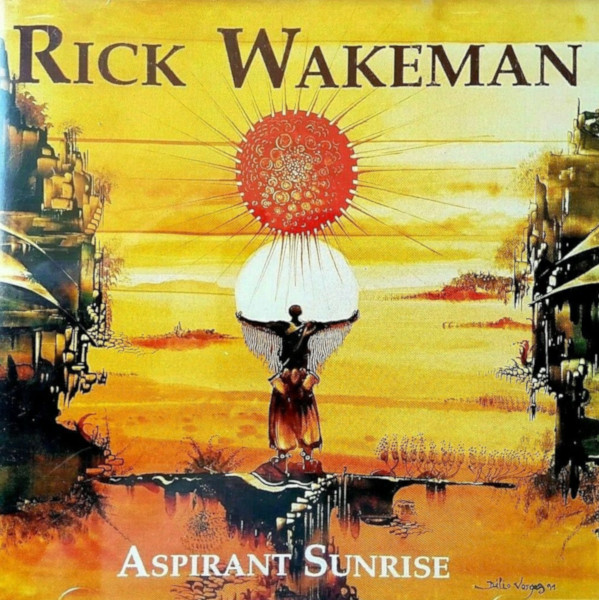 Well, yes, he might have aspired to more than another series of new age instrumentals, but the sun is greater than the hole if he hadn’t.

As the 80s closed, collapsed, curled into a fetal ball and sobbed, whatever you want to call it, Rick Wakeman released a trio of new age instrumental albums under the Airs (Country, Night, Sea) in some order. Recorded on the solo piano, they were naturally inspired (that is, inspired by Nature) works that were clever enough to remind you that Wakeman was a pianist of no small measure. (Ah, where’s Mark Prindle when you need him?) A few years later, Wakeman repeated the experiment for the Sun series, this time creating naturally inspired pieces on electronic keyboards. The effect is similar to Airs in that if you enjoyed the one, you’ll like the other. Wakeman continues to impress with his sound selections and endless melodies, though you get the sense after six of these albums that he could have composed and recorded these in his sleep.

Now, I’m not going to lie to you. If you don’t like new age music, putting Rick Wakeman’s name on the album cover isn’t going to make you like it more. (See Steve Howe and Paul Sutin for more on this point.) Yes, the song titles sound like a Celestial Seasons sampler pack. Yes, Wakeman probably didn’t have whispering cornfields in mind when he wrote the song “Whispering Cornfields.” And, yes, there’s not much on here to distinguish this new age record from the hundreds of other new age records recorded by people you’ve never heard of before that you would probably dismiss as piffle out of hand. But you also know that Wakeman is no ordinary ivory tinkler, and even the great composers wrote simple tunes sometimes.

I won’t bother with a song-by-song breakdown here because there’s not much that separates one song from another. One may employ a Chilean pipe or flute sound, another might use piano notes or the synthesized sound of a plucked guitar, but they’re all pretty much of a calming piece. Wakeman creates a short melody, embellishes it with wisps and washes of sound, twists it slightly at a different angle, and returns. You’ll find deeper stuff from Brian Eno and Vangelis, to be sure, but if you’re going to throw your money away on new age music, better to throw it Wakeman’s way, I say.

Note that this series was originally released in 1990 in Germany, released individually and collectively as The Sun Trilogy in 1991 in the UK, and later re-issued on President Records and Pure Sounds in the 90s. I can’t speak to whether one pressing is better than another; it’s digital music, so I’m guessing they all have about the same level of warmth. The Sun series doesn’t really shine any new light on Wakeman as an artist—you knew he could make music like this after the Airs were aired—yet it’s a pleasant and soothing journey all the same, suitable for contemplating nature, navels and anything in between.

A1. Thoughts of Love
A2. Gentle Breezes
A3. Whispering Cornfields
A4. Peaceful Beginnings
A5. Dewy Morn
B1. Musical Dreams
B2. Distant Thoughts
B3. The Dove
B4. When Time Stood Still
B5. Secret Moments
B6. Peaceful

All songs composed by Rick Wakeman.