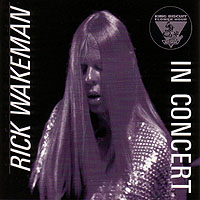 Terrible cover, great performance. As the liner notes from Bruce Pilato explain within, King Biscuit sought to bring the excitement of live performance to the comfort of listeners’ homes, and that’s exactly what happens here (even nearly thirty years later). Recorded on November 2, 1975 at the Winterland Theater in San Francisco, this show was part of the Myths & Legends tour. The band was one of Wakeman’s best, including guitarist John Dunsterville (whose topical solo on “Catherine Howard” has to be heard to be believed), vocalist Ashley Holt, a full rhythm section and horns. As for the keyboardist himself, his performance is electrifying, steeped in the boundless ambition and showmanship that were then synonymous with Wakeman. If one were to capture a point in time and say “Let this moment speak for me,” 1975 would best bespeak Rick Wakeman. His association with Yes was still fresh in many minds, and his three solo albums to date tasted only the sweet wine of success. So it was in this spirit that Wakeman ended the first phase of his career, one marked by excess and (eventually) exhaustion but also one remembered for its remarkable energy. Even today, dozens of albums later, there isn’t one track I’d want to see replaced here for another (and asking for more is out of the question, since King Biscuit already crammed over 70 minutes of music on this disc). The rich and vibrant sounds of “Journey” roll out to meet us, followed by the gracious “Catherine Howard” (one of three wives to be introduced this evening), whose austerity is ameliorated by John Dunsterville’s jukebox antics, delighting the crowd with snippets of “California, Here I Come” and “Whole Lotta Love” among others. “Sir Lancelot and The Black Knight” brings the most recent of this wholly amazing trinity to the table, at various times sounding like The Who (Holt has more than a dollop of Daltrey in him) and Camel (Bardens and Wakeman are similar soloists). The rest of the concert leans on the same works, occasionally a little muddy, but exciting enough to rouse the listener’s interest or introduce some miniature moment of wonder at frequent intervals. This is everything I could ask for in a Rick Wakeman live disc. It’s generous, it’s saturated with energy (no bootleg issues here), and the vintage is unimpeachable. The venue isn’t my favorite (wholly inappropriate whoops and hollers swoop through the air like a rodeo), but this vendee isn’t complaining. I had expected a supplemental snack with this purchase, and instead got a biscuit I could make a meal from.

All songs written by Rick Wakeman.

[Review] Rick Wakeman: The Myths and Legends of King Arthur and The Knights of the Round Table (1975)