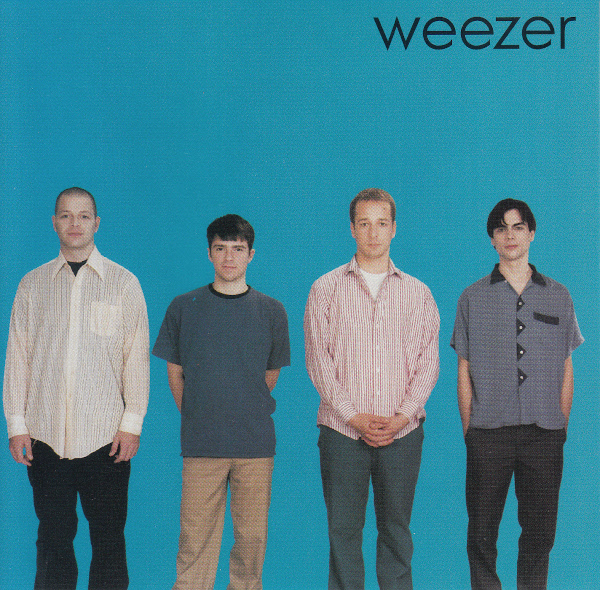 Flannel is out, bowling shirts are in, in this cross between Teenage Fanclub and nerdvana.

Three chords hurled against the weltschmerz of grunge by a band of loveable losers. That was my initial impression of Weezer, and you couldn’t help but fall in love with them. Kurt Cobain wanted to kill himself, Rivers Cuomo wanted to read X-Men comics and play Dungeons & Dragons. I suppose I wanted to be as angry at the world as Nirvana and Soundgarden, but when I looked in the mirror, what stared back at me was my inner Weezer.

The band’s first album, produced by Ric Ocasek, Americanized the appeal of Teenage Fanclub. Or offered a cuddly, non-threatening alternative to Nirvana, depending on how you see these things. Weezer didn’t invent power pop, to be sure, but they came close to perfecting it on their first album. After a false start (whose idea was it to lead off with My Name Is Jonas?), the band settles into a groove and never slips out of it. No One Else is a barbed pop song (Rivers Cuomo does have a slight dark side) about a controlling boyfriend, played out with bubblegum sweetness. The World Has Turned And Left Me Here is about love lost, resigned rather than angry. The real magic happens on the next two tracks: Buddy Holly and Undone–The Sweater Song. The first turns the cuteness quotient up to eleven and cements their status as spokesmen for disaffected dorks everywhere, the second is a brilliant blow-off song with Cuomo showing how cool it is to be uncool.

The second half doesn’t contain a single boring track. Surf Wax America is dropout rock with a half-hearted attempt at Beach Boys harmonies, Say It Ain’t So delves into Cuomo’s darker side with a crushing chorus, In The Garage is the ultimate geek anthem (I’ve still got my Dungeon Master’s Guide) and Holiday is third-generation Kinks. The band’s final bow is an eight-minute song built on three chords, which is a pretty amazing feat.

I know Weezer isn’t Led Zeppelin. Nirvana did as much or more with three players and, if there’s a decent guitar solo on Weezer, I missed it. But I still lament the loss of my Monkees lunchbox and the innocence it contained, and there’s something innocent about Weezer, particularly in a world where alternative rock seemed to have the sole purpose of bringing everybody down. The Blue Album was the wide open sky of a beautiful day without a trace of cloud, and the perfect soundtrack to the summer of 1994.