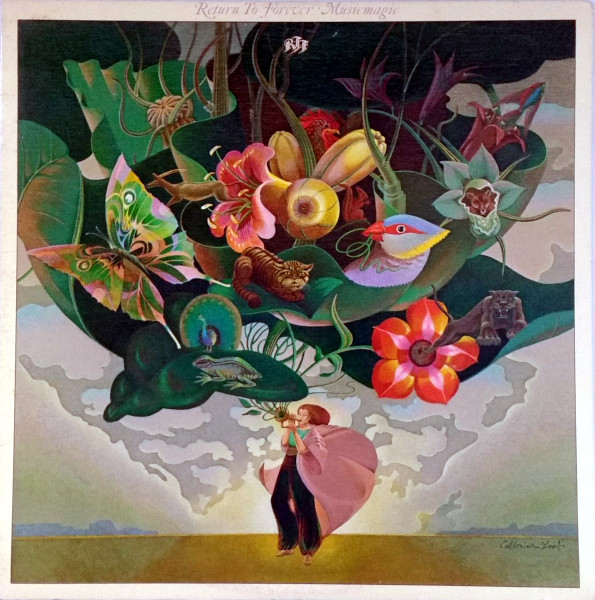 This is moran line with the Corea albums around it (Secret Agent, Mad Hatter) than Di Meola-era RTF.

So what exactly constitutes a Return To Forever album anyway? Musicmagic blurs the line between RTF and Chick Corea’s solo recordings, since the same basic lineup (Joe Farrell, Gayle Moran et al) was employed on Secret Agent and The Mad Hatter. Far from the stellar fusion of Romantic Warrior, Musicmagic is a song-oriented album. It’s some of the most commercial music that Corea has recorded (e.g., Stanley Clarke’s “So Long Mickey Mouse”), but not some of his best. Corea conjures the usual keyboard wizardry, Clarke takes a bow to his bass, and the rest of the band kicks something into the kitty, so there’s fire behind the RTF smokescreen, just not enough of it.

Blame the high bar on earlier incarnations; of the RTF albums I own, this is the lamest and it’s still a pretty good record. Gayle Moran’s voice is expressive, warm and occasionally captivating. It’s on Musicmagic that she becomes, in the words of Beavis, “a full-fledged member,” playing keyboards and writing the graceful “Do You Ever.” The horn section also gives the band a different flavor, evoking memories of Frank Zappa’s The Grand Wazoo. Of Corea’s compositions, “The Endless Night” and “Musicmagic” have their mind candy moments where the mustachioed magician coaxes an armoire of sounds from his speaker cabinets. Stanley Clarke, who also sings on this album, adds the popular “So Long Mickey Mouse,” which is la-la-lovely in spots.

Surprisingly, more than half of this album turned up on The Best of Return To Forever. If you bought that compilation, you were robbed. The selections on Musicmagic are simply too timid when RTF’s toils are taken in toto to testify in such a trial. If your tastes skip toward smooth jazz or disco, then Musicmagic might be the safest entry into deep waters, but you can’t stand in the shallow end forever.