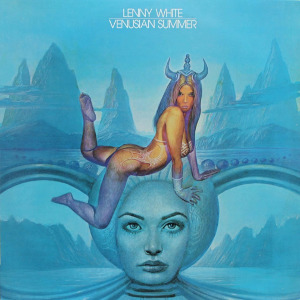 Who knew that Lenny White was a science-fiction freak? Add some funk, and you’ve got one of the best solo RTF albums.

Out of all the RTF solo albums, this is the one that surprised me the most. Venusian Summer is a fantastic fusion of funk and prog, featuring a top-flight band of familiar faces (Doug Rauch, Doug Rodrigues, Larry Young, Larry Coryell, David Sancious, Raymond Gomez, Al Di Meola). Although I enjoyed Lenny’s compositional contributions to RTF so far (“The Shadow of Lo,” “Sofistifunk”), they didn’t prepare me for the far-out and amazing journey of Venusian Summer. The album also turned me on to Doug Rauch, an incredibly talented bass player who died too soon.

Given the fact that it took Stanley Clarke a few albums to get it all together, I expected that White’s first solo album would be more tentative or derivative. It’s neither of those things. Instead, it’s a confident vision of fusion presented through the conceptual lens of science fiction and fantasy, which for me was always the best part of RTF. Although the album is uniformly excellent, highlights include the 10-minute title suite and the two closing tracks, “Mating Drive” and “Prince of the Sea,” which showcase the superlative soloing of Raymond Gomez and Al Di Meola, respectively. The first two tracks, “Chicken Fried Steak” and “Away Go Troubles Down The Drain,” are funkier entries where Rauch nearly steals the spotlight.

In my opinion, Venusian Summer concedes nothing to the RTF albums from this period. Prog fans with fusion inclinations should sign on for this and the even spacier Adventures of Astral Pirates. It’s a shame White didn’t stick with the science fiction format longer, but at least he left us two minor classics in the sci-fi/fusion canon.