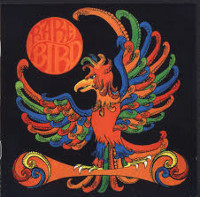 Kronomyth 1.0: ORGANASM. Tony Stratton-Smith’s fledgling Charisma label would prove pivotal in the progressive rock movement, introducing many in the world to the work of Genesis, Van Der Graaf Generator and The Nice. Rare Bird never quite joined the rarefied ranks of those bands, despite Stratton-Smith’s early enthusiasm and a promising debut that included a worldwide hit in “Sympathy.” The band’s initial distinction was a double-keyboard attack that invited comparison to the Nice (although the outnumbered Emerson still had the upper hand), led by Graham Field (organ) and David Kaffinetti (electric piano). On their eponymous debut, Rare Bird sound like a cross between VDGG, The Nice and, thematically, Barclay James Harvest (humanity, war and birds are recurring themes for both). The arrangements are often bombastic (“Iceberg,” “God of War”), occasionally quite seductive (“You Went Away,” “Natures Fruit”) and make good use of vocalist Stephen Gould’s dynamic range. As with most young bands, Rare Bird were still a work in progress. The rhythm section of Gould and Ashton is serviceable, not superlative, and the band seems to lack a proper lyricist. The result is a debut that sometimes feels half baked (“Times,” “Melanie”), and more than a few times I wondered if the band weren’t simply a smarter version of Steppenwolf rather than winged princes of the new progressive army. Few acts were pushing rock’s boundaries with as much force in 1969, however, so proggers will give Rare Bird the benefit of the doubt, particularly during one of Field’s or Kaffinetti’s flights of fancy. If you’re in the mood for heavy, heady keyboard prog and don’t mind the occasionally ham-handed passage, Rare Bird’s debut is certainly worth a flier. [Note that the US version featured different artwork and flipped sides one and two. No doubt the excellent “Beautiful Scarlet” proved a better opening track, just as “God of War” provided a better close.]

All compositions by Rare Bird.