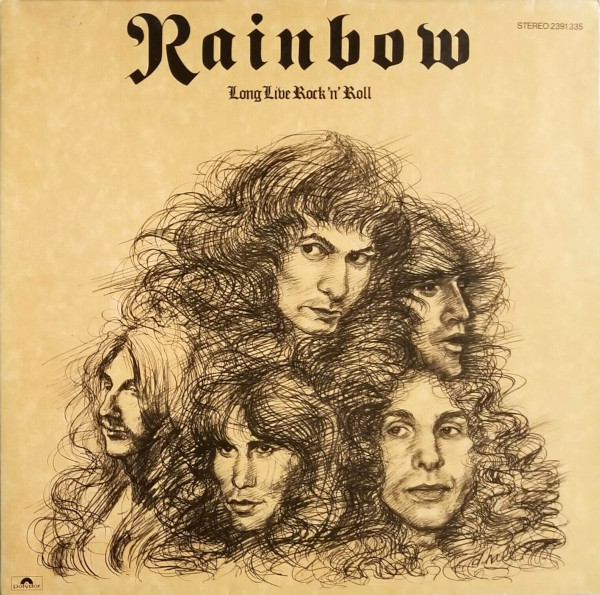 With Blackmore and Dio, you know you’ll get your dose of Arthurian legend and demonology.

The testament of Rainbow, book the fourth, wherein the gates of hell are opened a little wider, the images therein made more tantalizing by that brilliant barker, Ronnie James Dio. Upon the release of Long Live Rock ‘n’ Roll, Rainbow might have been the best heavy metal band on either side of the Atlantic. Led Zeppelin was losing air, Black Sabbath was graying, and what emerged from their shadow was Ritchie Blackmore’s Rainbow.

Like Deep Purple, they were a black hole looming; assimilating and digesting and expelling players, a Shub-Niggurath of metal heroes. Cozy Powell, Bob Daisley, Dio: spare parts and rogue moons. But it was new blood like this that re-energized Rainbow.

Long Live Rock ‘n’ Roll is mystical, melodic English (despite the newdutch Dio) heavy metal at its best, dancing with the dark spirits as only the English can do. It has Arthurian legend (“Lady of the Lake”), demonology (“Gates of Babylon”), medieval intrigue (“Kill The King”) and an affinity for darkness (“Sensitive To Light”). Judas Priest was selling the same sermon, but their star was still rising. Rainbow had risen to its logical height; in the absence of Sabbath and Zeppelin, here was the Devil’s Captain leading the charge.

The Sabbath and Dio albums after are equally important battles, since the presence of Dio alone commands respect, but at the moment I prefer this record to any of them. It’s a door leading to dark fantasies, an escape from the dull reality of regular rock ‘n’ roll (BadCo et al). Certainly there’s enough here to fortify the will of the heavy metal faithful until the reinforcements (Priest, Maiden, Motorhead) arrived.

All songs written by Ritchie Blackmore/Ronnie James Dio unless noted.