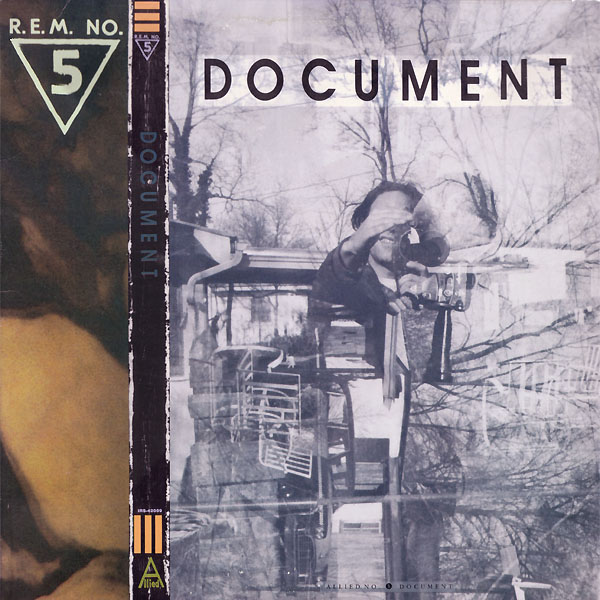 The One I Love, It’s the End of the World As We Know It, Finest Worksong. Need I say more?

Kronomyth 6.0: Last will and Document.

One day I will learn all of the words to It’s The End of the World As We Know It and subsequently sing them. It will probably be the last day of my life and I will mumble most of them. It will be Stipian, this moment, lost in irony as my quiet howl against taking anything in this world seriously is misunderstood and one inexperienced technician and one overworked nurse argue over whether my dying words began “It hurts like an earthquake” or “It’s hard for a nurse’s aide.” I will accept it quietly the way I have so many other indignities over the years, letting Peter Buck’s ringing guitars drown out the deafening dumbness of this world, the airy angelspeak of “Fall On Me” and “Perfect Circle” trailing behind like cloudmatter caught on a trouser cuff.

Document is the platinum blind leading the stoned dead into a bitter world of bored revolution, proletarian poetry and stillborn emotion. It is one of the finest albums they have ever recorded, and the first side stands as one of the most perfect pieces of plastic produced in the ‘80s. The second side falls apart some, or rather grows apart from track to track, unraveling after The One I Love levels the last stalk in the cold heart’s harvest.

A dark and brooding album much of the time, Document is yet exquisitely conceived. The opening Finest Worksong is the sharpening of a knife that cuts deep for the next forty minutes, from Disturbance at the Heron House to Oddfellows Local 151. Even the exhuming of Joseph McCarthy to hang him once more in effigy is welcome sport when it’s done with such joie de vitriol. From this point forward, R.E.M. assumed a prominent place on the national stage alongside U2 as spokespeople for their generation. This album documents the rise from revolutionaries to rock stars and remains required listening for most everyone, especially if you intend on singing along to the Apocalypse.