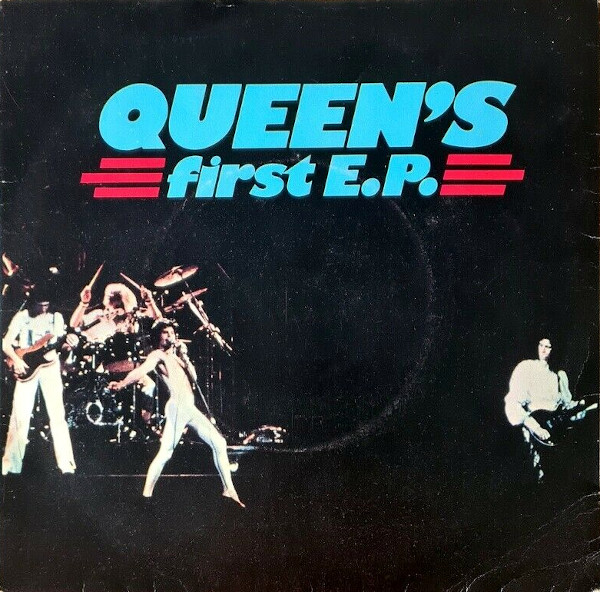 A fabricated single to fill in the gap between Queen albums featuring four previously released songs.

Kronomyth 5.5: Four from four by four.

Conceived in the 1950s, the extended play (EP) record was basically a double single, featuring two songs (instead of one) on each side of a single. By the 1970s, EPs had fallen out of favor, and so Queen’s First E.P. would have been greeted by the record-buying public as something of a novelty. Collecting one album cut each from their last four albums, the EP is designed as a sort of second chance for these album tracks to catch radio airplay.

The first side contains what I would consider the two best non-singles from Queen‘s last two albums, Good Old Fashioned Loverboy and Death on Two Legs (Dedicated to…). The latter actually did get radio airplay in the U.S., although clearly not as a result of this E.P., which wasn’t released in the U.S. “Good Old Fashioned Loverboy” is a great song, but the world (or at least the radio) wasn’t ready for it yet.

The second side digs deeper into their second and third albums. White Queen (As It Began) would have been a longshot for a single, as it already sounds like something from the bygone era of prog, and Tenement Funster is the third “single” from an album (Sheer Heart Attack) that didn’t even have two decent singles on it.

Although this has become something of a collectible, its musical value is limited, as these versions are the same as the original album tracks. Honestly, a live EP would have held more appeal — and who’s to say that a live version of “Death on Two Legs” wouldn’t have sounded even better?