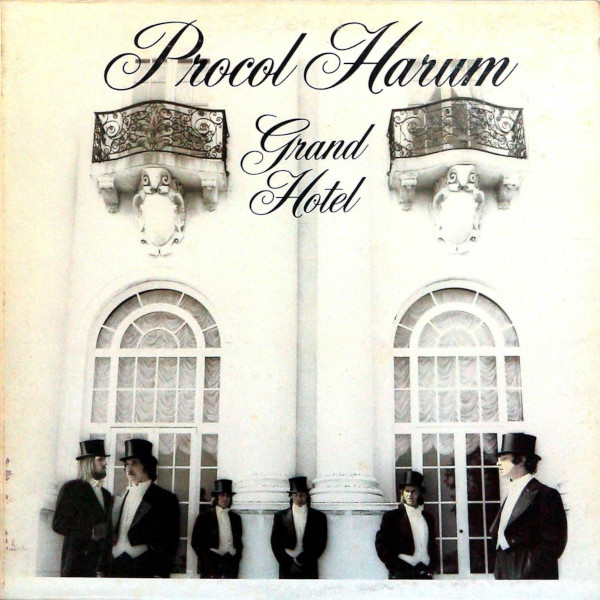 An almost full return to their earlier grand estate, despite being down to only three original members.

Kronomyth 7.0: A second home by the sea.

The band hadn’t sounded this grand, really, since A Salty Dog. The opening title track sets the table for a musical feast of melody, poetry and a dash of royalty from the standing kings of the heroic couplet, Messrs. Brooker and Reid. With Robin Trower gone and the group no longer pulled in two creative directions, Procol Harum set their course for the high seas of musical adventure once more. Three different ways of saying the same thing, I suppose, but it bears repeating, especially for those of us who thought our journey had come to an end.

Broken Barricades showed the band hadn’t lost their salty taste for adventure, particularly on the songs written by Gary Brooker and Keith Reid. But where that album failed to sustain its course over an entire album, Grand Hotel never strays from its noble objective. Poignantly worded, tastefully orchestrated, the songs are unfailingly excellent, even in failed circumstances. Love ends, luxury ends, life ends, yet Reid’s poisoned pen is wrapped in Brooker’s refined wrappings and all is strangely right again with the world. It was ever thus, after all, so why not go down with the ship singing.

Grand Hotel is a conscious attempt to recapture the opening excitement of “A Salty Dog,” and it works. Here again, it’s scored for voice and piano, drums and orchestra; if the remaining trio adds a note, they needn’t have. Toujours l’Amour continues a French theme introduced in the first track, and likely encouraged the idea among listeners that Grand Hotel is at least a partial concept album (it is not). It’s one of those songs where Jethro Tull comes to mind, particularly in the lyrics. A Rum Tale is an even darker treatment of the same subject, escape from a failed romance. The first side ends with T.V. Ceasar (later corrected), and with it the illusion that Grand Hotel had been following a linear storyline. It’s a rousing track, briefly doused by another unimaginative organ solo from Chris Copping.

The second side starts with a playful, Kinksian tale of venereal disease, A Souvenir of London. Bringing Home the Bacon, which was a minor hit for the band, is the harshest song on here, musically and lyrically, with a pretty good guitar solo from the new guy, Mick Grabham. The lyrical imagery, not for the delicate of stomach, makes the entire song feel like a feverish version of “Savoy Truffle.” For Liquorice John is a tough nut to crack from a lyrical standpoint. It appears to be about several different deaths, or maybe the same death seen from three different perspectives. Whatever its deeper meaning, it feels like a deep track and is oddly affecting in its own way. Fires (Which Burnt Brightly) is the album’s classiest cut since the opening “Grand Hotel.” That class is bought with the estimable talents and continental cachet of French soprano Christiane Legrand. It would have made for a grand ending. Instead, the album closes with the addict’s tale of Roberts’ Box, which mixes elements of island music and doowop in a style reminiscent of 10cc, only not so clever.

At this stage, Procol Harum was essentially a trio of Brooker, Reid and B.J. Wilson (who continues to make a case for himself as one of rock’s most underrated drummers). The remaining members are more or less hired hands, but as the band’s last two albums proved, more hands stirring the pot didn’t produce better results. Grand Hotel benefits from a consistent vision, some very strong material and Brooker’s increasingly steady hand as an arranger. You’ll want to live in this album for a little while at least if you enjoy the music of Procol Harum and may even make a second home of it, when you tire from the sea.

All selections words by Keith Reid, music by Gary Brooker.

*Credited as “T.V. Caesar” on reissues.

Artwork and design by Spencer Zahn. Photography by Jeffrey Weisel.