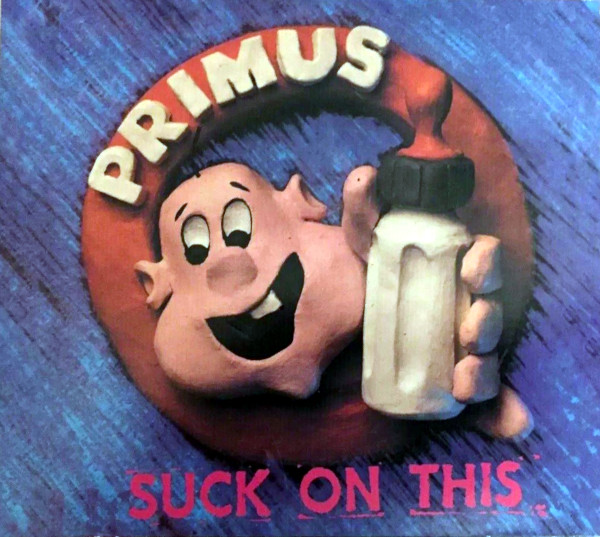 I’ve heard bands suck before, but Primus is the suckiest bunch of sucks that ever sucked.

Kronomyth 1.0: All hail the crimson butthole!

Primus asks the musical question: What if you took a wad of King Crimson’s technically proficient prog and squeezed it through a Play-Doh extruder in the shape of the Butthole Surfers? The band’s first album was recorded live, cost a few thousand dollars to make and was co-produced by an 18-year-old named Matt Winegar. Not normally a recipe for success, but in Primus’ strangely inverted world, where success is equated with sucks, it was a feast for the senses.

“Yeah, Moe, that team sure did suck last night. They just plain sucked. I’ve seen teams suck before, but they were the suckiest bunch of sucks that ever sucked.” – Homer Simpson, The Simpsons, season 7 episode 12 (“Team Homer”).

Describing the music of Primus is always a challenge because they are, first and foremost, unique. Sometimes, they remind me of a smart-ass version of Pantera (there are clearly heavy metal overtones in their music); at other times, Red Hot Chili Peppers with a rocket up their ass (funk is one of the main ingredients in the songs they concoct). And then there’s Les Claypool’s vocal delivery: a kind of hillbilly drawl mixed with a demented sense of irony. Perhaps the most obvious precedent is a song like King Crimson’s “Indiscipline,” which used similarly bizarre narrative structures to frame its ferocious chops. Primus’ music isn’t quite as transcendent as that, and there’s a world of difference between Les Claypool’s bass playing and Tony Levin’s stick playing, let alone the absence of a Fripp-like presence in the music, but you can hear how the one might have set the stage for the other.

Easily overlooked is the fact that Claypool, Larry Lalonde and Tim Alexander hadn’t been playing together as a unit for very long when these shows were recorded. The material was mostly developed while Todd Huth was the band’s guitarist, and Huth is credited with the guitar melodies on all but two songs. The two “new” songs, “The Heckler” and “Pressman,” feel underdone compared with the material around them. “John The Fisherman,” “Groundhog’s Day,” “Tommy The Cat” and “Harold of the Rocks,” however, are technical tour de forces that perfect the Primus formula. Most of those songs (plus the excellent “Pudding Time”) were included on the band’s first studio album, Frizzle Fry.

Despite its origins (live, underfunded, limited production expertise), Suck On This is a surprisingly clear vision of Primus’ abilities. There’s a short drum solo toward the end of “Jellikit,” but otherwise the music is tightly scripted. As for the crowd, they’re kind of a fourth member of the band, like a midnight showing of Rocky Horror. You may want to sink your teeth into Frizzle Fry first, but no harm done if you cut your milk teeth here.

All songs written by Primus, all lyrics by Les Claypool. Guitar melodies by Todd Huth except 3, 4.