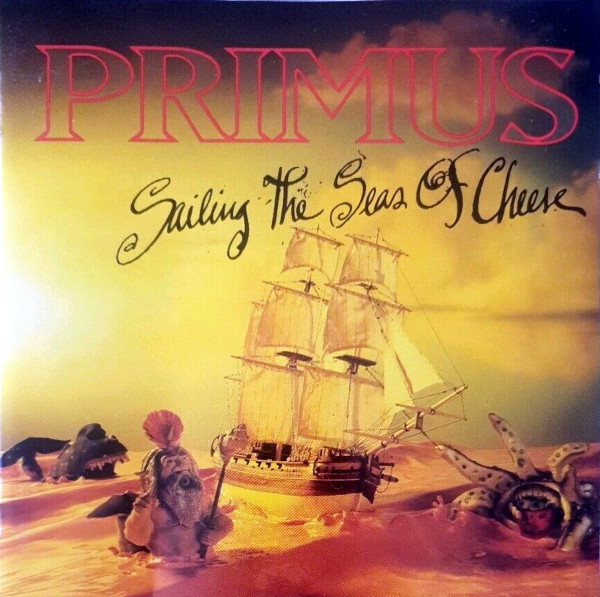 The band sets sail for the high seas of musical adventure and minor commercial success on their exciting major-label debut.

The last line of the album is probably the best place to start: “These guys are freaks, man.” The music of Primus is an enigma. They’re completely unhinged, yet bound to a rigid diet of drums, bass, guitar and absurd lyrics that immediately distinguishes them from any other band. Every Primus song sounds like a Primus song, but to call it formulaic misses the point that Primus is never boring. I don’t, for example, tire of listening to Sailing the Seas of Cheese. Not one minute of it seems repetitive. It’s ever-fresh, like the musical equivalent of a Twinkie.

Primus’ third album was their breakthrough into the bigs, sort of, being one of the first albums released on the newly formed Interscope label. Interscope would prove influential in the alternative metal scene, signing Helmet and Nine Inch Nails. Fortunately, the label didn’t try to rein in Primus. The band is as weird as ever on this album. The opening Seas of Cheese is a little sea ditty because, you know, why not? It’s an invitation into the unusual world of Primus, a harbinger of the strange voyage you’re about to undertake. Here Come the Bastards is Primus gone to war. It’s also a statement of purpose. The band combines minimalism with dazzling technical proficiency, a truncheon beating choreographed like a ballet. Sgt. Baker continues the war theme with aggro-funk metal and some premium screaming from Les Claypool. American Life features a rare social message from the band, a series of miniature stories (most of Claypool’s lyrics are a type of storytelling). Jerry Was a Race Car Driver is the album’s most recognizable “hit,” and was accompanied by an equally bizarre music video that made inroads with audiences on MTV. Eleven (named after its eleven-stroke time signature) and Is It Luck are more of the same, hooray.

The second side starts off with another ditty before taking a more experimental path. There’s a tighter version of Tommy the Cat with a cameo from Tom Waits that owes a nod to Captain Beefheart, a banjo/clarinet interlude called Sathington Waltz and a seven-minute-tall fishing tale inspired (presumably) by real events called Fish On, which namechecks Primus’ original guitarist, Todd Huth. Also appearing is the popular Those Damned Blue-Collar Tweekers and a reprise of the opening track, Los Bastardos. Like I said, after 45 minutes of this stuff, I was still hungry for more. Primus has found a way to dance in a confined space that is truly amazing sometimes. You know what to expect from song to song, and yet with each new song it’s like you’re hearing the guitar solos from Larry LaLonde, the tireless drumming of Tim Alexander and Claypool’s bizarre bass patterns afresh.

The story of Primus up to this point is one of refining their musical vision within a fixed medium. Salvador Dali’s paintings, for example, tend to look the same, and yet each offers new discoveries. Many exciting discoveries await on Sailing the Seas of Cheese. It’s all part of a single journey, with warlike overtones, a frontal assault on the apathy that popular music produces. It also has a strange sense of humor that feels more like a wrench in the works than a revolution. As an example of the early alternative metal scene, you’ll find few alternatives that are better than this.

(And, yes, this review sucks too, but not in the good Primus way.)

All songs written and arranged by Primus. Lyrics by Claypool.