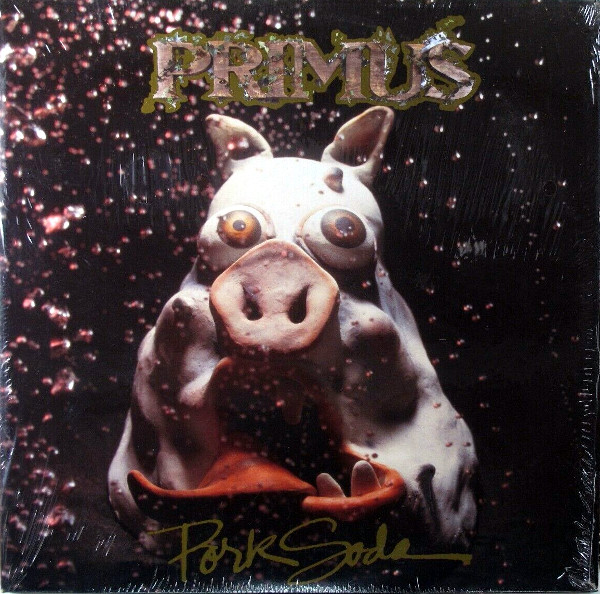 Atlantic Records takes a stronger hand in promoting Primus, and the band has their first cross-Atlantic hit.

Push down that little voice telling you Primus has sold out, down with all the other crazy thoughts about flying saucers, government conspiracies and mass media hypnosis. Because they couldn’t, not our little red wheelbarrow of weirdness in the gray parade of faceless alternative rockers. Softened? Maybe a little. Or maybe they realized that not every song had to be an amped-up adrenalin rush of bass, drums and guitar goading each other on to greater heights of madness. Age’ll do that to you. So let’s agree that Pork Soda is a more mature album, a sailing on the seas of calmer cheese, and ignore the symbol of Atlantis looming in the corner.

Okay, maybe maturity is the wrong word. Songs about hillbilly murderers, sex with chimpanzees and drowning your domestic troubles in the pork-flavored beverage of your choice are childish, impish and probably not for the squeamish. There is a lot of intelligence in Les Claypool’s lyrics too, but you need to dig deep to discover the intellect and innuendo behind them. Musically, the group seems to have moved the mayhem knob down a couple of notches. You still get the propulsive rhythms, surrealistic elastic bass lines and electric barbed-wire guitar, only in smaller doses. Primus more or less establishes the rhythm at the onset, mixes it up for the chorus and returns to their frog-clipped-of-a-leg-by-a-lawnmower meter.

Pork Soda surprised many (well, me anyway) by selling over a million copies in the US, much of those sales fueled by MTV’s heavy rotation of the video for My Name Is Mud. I’m not sure how many of that million were aspiring musicians and how many are wearing MAGA hats today. I suppose it doesn’t matter; stupored is as stupored does. Anyone who bought the album for that track couldn’t have been disappointed with what followed: Welcome to This World, Bob, DMV, Pork Soda, Mr. Krinkle. Just the sort of thing to drown out your carping spouse, crappy boss and brood of borderline ADHD kids.

Pork Soda also has its moments of musical exotica. The all-percussion piece, Wounded Knee, is a fair match for anything from Mickey Hart. The Pressman gets a heavy reading that reminded me of Led Zeppelin (the Prawn Song logo wasn’t completely tongue in cheek, apparently). And I’m pretty sure Les Claypool takes a bow to his bass in several spots. The group wasn’t sailing for commercial waters. Instead, Pork Soda is more of the same while at the same time being less of that more. (And, no, re-reading that sentence isn’t going to help.)

To date, this album is the most accessible entrypoint into the music of Primus, with the caveat that you’ll still need to twist yourself into a strange shape to get in. I’d give Sailing the Seas of Cheese the nod as the better album. Any album that compels me to buy a t-shirt with the album artwork on it has to be pretty special, especially given how sallow I look in mustard yellow. I probably won’t buy a t-shirt of Pork Soda, or any platinum record for that matter, but I did buy the compact disc and the royalties didn’t go to some political party, so win-win for everyone.

All songs written and arranged by Primus. Lyrics by Claypool.