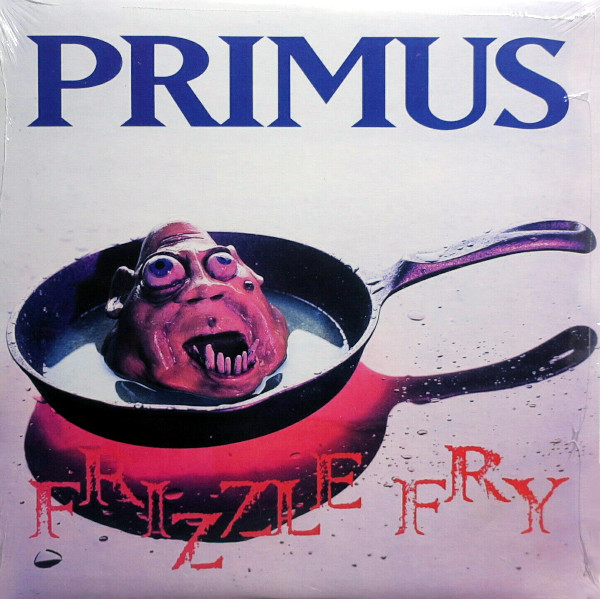 The band saved up enough money for a studio album, and almost saved the 90s from its own inanity in the process.

If you’ve already tasted Suck On This, well, you’re probably still traumatized. Frizzle Fry, their first studio album, turns the trauma up to eleven with razor-sharp renditions of “old” favorites and new songs. The band hadn’t changed much since their first album. They’d managed to get slightly better distribution (Caroline), wrote some new songs and producer Matt Winegar gets a 26-second plug for his new band, The Spent Poets. That’s about the only difference between the two, except for the impossibly clean sound that now pummels you with its precision. Les Claypool has called this his favorite Primus album, although I suspect he says that to all the gills.

Primus is a defiantly strange band, and the opening To Defy the Laws of Tradition could be seen as a kind of manifesto for their prog/thrash metal. Les Claypool is crazy like a fox, but he does a great job of pretending to be someone who’s just plain crazy. When he proclaims on Frizzle Fry that “I believe in Captain Crunch for I am the Frizzle Fry,” you’re not sure if he’s speaking in code or spouting nonsense. In a lot of ways, Primus was setting a new standard for the power trio that took what Rush was doing and pushed down the pedal into heavy metal. Tool seemed to borrow a page from Primus’ recipe book, and no doubt more than a few prog-metal bands salivated at the thought of creating similarly complex rhythmic structures. Conversely, I guess you could point back to bands like Anthrax and Metallica as influences, but somewhere along the way Primus took an unexpected left turn and drove straight into the musical wilderness.

Fans of their first record are likely to wonder what the difference is between these versions of Ground Hog’s Day, John the Fisherman, Harold of the Rocks and Pudding Time and the original live versions. The answer is “not much.” Primus had perfected them already on stage, and in the studio they sound much the same if a bit more precise. The new songs are a treat. Too Many Puppies reminds me of a completely funked-up metal version of Led Zeppelin’s “Black Dog,” while The Toys Go Winding Down should have wound up as the album’s single, since it’s almost (well, probably not) normal. The album also includes a few short pieces to keep listeners on their toes, including a live excerpt of “To Defy the Laws of Tradition” and thirty seconds of the banjo dog band on Sathington Willoughby.

In 2002 or 2004 or something like that, this album was remastered and a cover of The Residents’ Hello Skinny and Constantinople were added at the end. Primus’ place in musical history is part of a continuum of rock’s never-ending freakshow. The band’s original vision hasn’t changed much over the years; you can pick up any Primus album and more or less get the same experience. That said, you definitely should experience them at least once, and may find yourself hooked after that. Their sense of the surreal combined with superlative technique is an unforgettable combination that truly is one of a kind.

A1. To Defy the Laws of Tradition
A2. Ground Hog’s Day
A3. Too Many Puppies
A4. Mr. Knowitall
A5. Frizzle Fry
B1. John the Fisherman
B2. You Can’t Kill Michael Malloy (Matt Winegar)
B3. The Toys Go Winding Down
B4. Pudding Time
B5. Sathington Willoughby
B6. Spegetti Western
B7. Harold of the Rocks
B8. To Defy

All songs written and arranged by Primus unless noted. All lyrics by Claypool. Guitar melodies on A1/A2/A5/B1/B7 by Todd Huth.

2002 vinyl elpee version
A1. To Defy the Laws of Tradition
A2. Ground Hog’s Day
A3. Too Many Puppies
A4. Mr. Knowitall
A5. Frizzle Fry
A6. John the Fisherman
A7. You Can’t Kill Michael Malloy (Matt Winegar)
B1. The Toys Go Winding Down
B2. Pudding Time
B3. Sathington Willoughby
B4. Spegetti Western
B5. Harold of the Rocks
B6. To Defy
B7. Hello Skinny/Constantinople