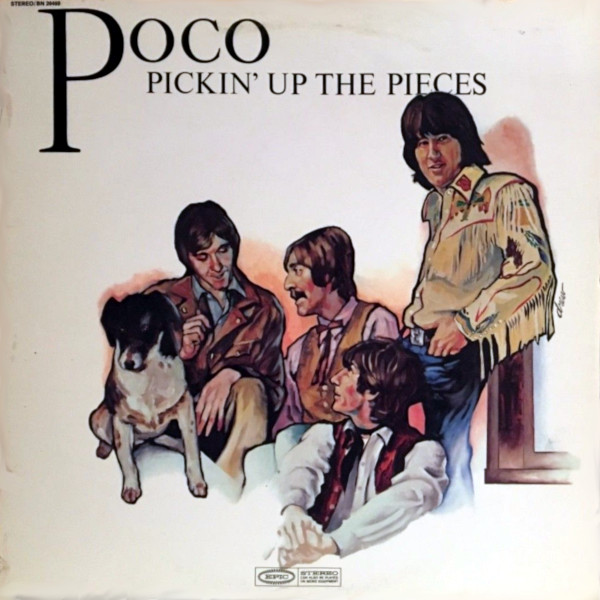 Poco’s first is a sweet and surprisingly solid collection of country-rock originals featuring the songs and vocals of Richie Furay.

Kronomyth 1.0: Sweethearts of the Buffalo.

If you were going to argue that Buffalo Springfield was more talented than The Byrds, you contentious bastard, you might want to pick your fight by starting at Pickin’ Up The Pieces. Poco’s first album is the only one that even alludes to that band’s breakup, Neil Young and Stephen Stills having washed their hands of it apparently, with Richie Furay and Jim Messina buffalo soldiering on with a remarkably strong and sweet collection of psychedelic country rock/pop songs. If Sweetheart of the Rodeo was a revelation, Pickin’ Up The Pieces felt like a relaxing vacation from the pretensities (i.e., propensity for pretentiousness) of the pop-music machinery.

More than the work of Neil Young or CSN, Pickin’ Up The Pieces is a logical followup to the music of Buffalo Springfield, but with a decidedly country twist. Sweetheart of the Rodeo existed very much in the world of country, whereas Pickin’ admits the sunlight of psychedelic rock and pop music into the mix. In fact, the opening “What A Day” sounds for the life of me like Buffalo Springfield meets The Monkees, and I mean that in the nicest way possible as someone who once proudly owned a Monkees lunchbox. Personally, I feel Poco strikes upon a better amalgam of country and rock/pop on their first album than The Byrds, providing a clearer path forward for bands like Eagles (whose Randy Meisner was briefly a member). Poco also hits upon some really interesting vocal harmonies in their music, if a bit shrill at times, while the voices of The Byrds never meshed as well after David Crosby left the band.

Pickin’ Up The Pieces is full of pleasant and unexpected discoveries, none moreso than the discovery that Richie Furay is a prolific songwriter. He has a hand in writing all but one track, the instrumental “Grand Junction,” and shows himself capable of conjuring a range of styles, which you can hear at the end of side one in the unlikely pairing of “Make Me A Smile” and “Short Changed.” Furay’s voice is pleasant but not particularly strong, drummer George Grantham gives the band a decent alternative (e.g., “Calico Lady”) and Jim Messina takes a turn at the microphone on “Oh Yeah” but fails to impress. One knock on Pickin’ Up The Pieces is its general lightness. There are several occasions where Furay tries to reach for something deeper, a grunt or a growl sometimes, but there isn’t the edge in his voice that came to Young and Stills so naturally.

Truthfully, I was expecting Poco’s first to be a tentative affair, short on originality. Instead, it’s a cool, confident breeze of an album, with no shortage of good ideas, and maybe a bit short on superlative musicianship. (Rusty Young’s pedal, for example, seems to be on a much shorter leash than Sneeky Pete Kleinow’s.) The Byrds (and, by extension, The Flying Burrito Brothers) may have arrived at the groundbreaking mix of country and rock first, but this rodeo by a different name smells sweeter.