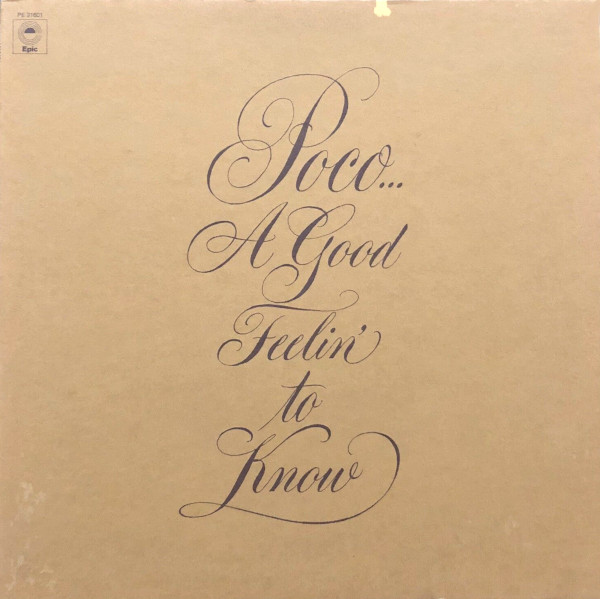 Maybe it was time to take the words “poor man’s” out of the comparisons to Buffalo Springfield and The Byrds.

In a surprising move, Poco released their strongest country-rock album so far with A Good Feelin’ To Know. I write “surprising” because their last record, From The Inside, kind of sucked. I was prepared for more songs about railroads and cowboys, but this is the first Poco record where invoking the ghost of Buffalo Springfield is meant as a compliment.

Like that band, A Good Feelin’ To Know showcases three distinctively talented singers/songwriters in Richie Furay, Paul Cotton and Timothy Schmit. The record gets off to a rousing start with Furay’s “And Settlin’ Down,” also the album’s lead single, which makes good use of the band’s instrumental and vocal interplay. Cotton’s “Ride The Country” reminds me of Neil Young in the cranky vocals and slightly bittersweet taste; maybe it’s a minute too long, but so far this is the best one-two punch of any Poco album and a complete departure from their last album’s limp country opening. Schmit gets the spotlight next for the luminous “I Can See Everything,” featuring some exotic percussion from George Grantham. It’s a case of all three artists putting their best foot forward while inverting the country-rock formula to put the emphasis on rock this time.

You’d think things would slow down after that, but instead A Good Feelin’ To Know maintains the same high standards all the way through. Stephen Stills’ “Go And Say Goodbye” gets a twangier reading from Furay and Cotton delivers two more rockers, “Keeper of the Fire” (again suggesting Neil Young) and “Early Times.” Cotton is the biggest surprise on this album, since I had him pegged for a country boy on the last record and he seems to be itching to make a rock ‘n roll album this time out. Furay’s upbeat “A Good Feelin’ To Know” returns to the mood of the opening track, Schmit delivers the album’s sweetest harmonies on “Restrain” and Furay closes it all with the gospel-inspired “Sweet Lovin’” featuring Rusty Young’s protean pedal steel as an organ this time.

In an era when country-rock was in its commercial ascendancy and arriving as it did on the heels of Eagles’ first album, you would think A Good Feelin’ To Know would have got a better reception. Instead, the album stalled well shy of the Top 40, Poco apparently incapable of cashing in on a style they helped create. Or maybe the awful album cover was to blame. Their next album, Crazy Eyes, fared better and was likely the beneficiary of people who listened to, and liked, the “new” Poco. Of minor interest, producer Jack Richardson was coming off the successful Love It To Death by Alice Cooper, a name that pops up more often than you would think in these Poco reviews.