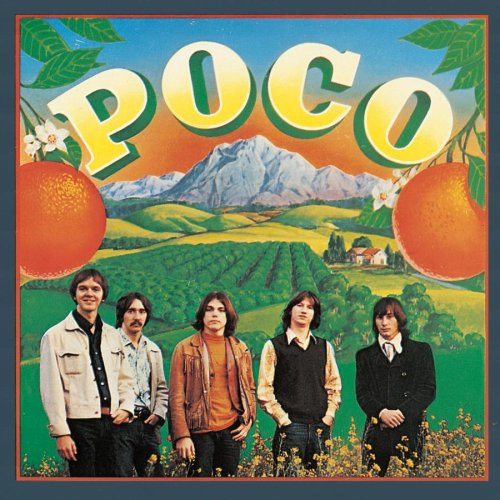 The heavier electric followup to their first album is more rock & soul than country, with fuzzed-out pedal steel and a bigger bottom end.

Poco’s first album, Pickin’ Up The Pieces, had a certain innocence that you simply won’t find on their second. This is the band’s bonafide rock record, from the fuzzed-out organ sound (actually Rusty Young’s pedal steel filtered through a Leslie speaker) to the richer bottom end (courtesy of new bass player, Timothy B. Schmit). There were times on their first record that I felt Richie Furay was going for a kinder, gentler Neil Young, but kind and gentle don’t come up on their self-titled sophomore effort, unless it’s to point out that “Anyway Bye Bye” is probably the best thing Furay has written since “Kind Woman.”

You need to remember, I suppose, that country-rock was still a very fluid form in 1970. Outside of The Byrds, Flying Burrito Brothers and maybe Grateful Dead, few bands were interested in mixing country and rock music. Poco and producer Jim Messina seemed to have second thoughts about their initial approach on the second album, turning up the amps and turning toward soul music for some of their inspiration (“Anyway Bye Bye,” “Don’t Let It Pass You By”). As if to underscore how much had changed in a short time, the record closes with a louder version of “Nobody’s Fool” that leads into the sort of extended jam you would expect to find on a live record by Traffic or Grateful Dead.

Poco hadn’t abandoned the country-rock experiment by any means. A straightforward reading of George Jones’ “Honky Tonk Downstairs” and Messina’s “You Better Think Twice” belong squarely in the burgeoning country-rock camp, “Keep On Believin’” too. But the music is played with a heavier hand, revealing the band’s roots were in rock, not mountain music. Mind you, I’m not complaining. As brilliant a turnaround as Sweetheart of the Rodeo was, it required more than a little faith from the band’s faithful to accept it. Poco’s self-titled second album is an easier pill for rock fans to swallow. You may miss the pungent sound of the pedal steel or the poetic pretensions of a “Tomorrow” on this album. You won’t miss the fact that Poco isn’t afraid to stretch out musically; there are moments on “Don’t Let It Pass You By” where (I kid you not) I wondered if the band had proggish aspirations.

As part of Poco phase one, this and their first album defy expectations and easy categorization. You can call them a country-rock band if it makes you feel better. What they really are is a collection of talented musicians whose interests ran across rock, country and soul music. And for those first few albums anyway, it was a pretty good run.