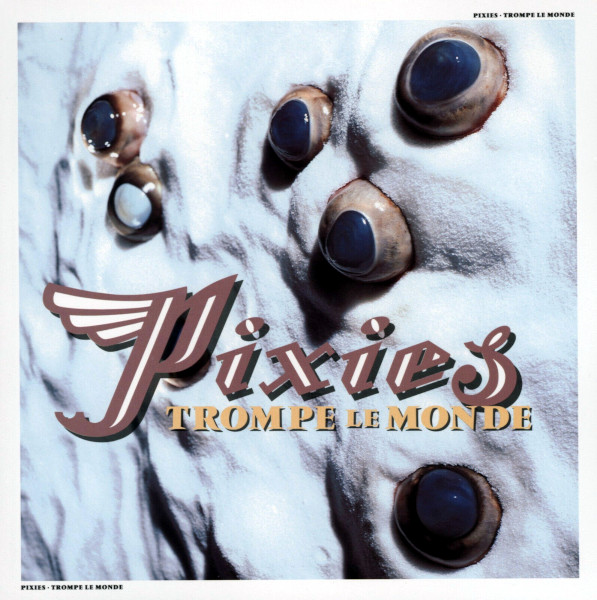 Pixies go out in a blaze of glory. Never mind those Seattle bands, here’s your best pop/punk band on the planet.

Let the record show that Pixies went out in an explosion of sound, an apocalyptic sunset. Trompe Le Monde (“fool the world”) is a bittersweet masterpiece, a portrait of a band both at the height of their creative powers and one fraught with incredible tensions. The members don’t complement each other so much as compete to see who can make the most noise, yet it all comes together like choreographed chaos. It also didn’t hurt that the band hurled fifteen brilliant songs out the window before heading off the cliff.

The band’s lyrics have always had a surreal, dreamlike quality to them, and listening to Trompe Le Monde is like being in the middle of a waking dream. The ideas seem purposefully disconnected, as though Black Francis cut out rather than cut up lyrics. In some cases (“Bird Dream of the Olympus Mons,” “The Navajo Know”), the songs are little more than haikus set to music. Black and the band rev up their engines, race through two or three minutes of hellfire fury and aching beauty, crash and start over again. The first time I listened to Trompe Le Monde, it felt like fifteen botched surgeries. Pixies records always feel that way; it takes a few listens before the beauty underneath it all bubbles up.

Some have pointed out, to their dismay, that Kim Deal sings less this time. The good news is that she plays more. I don’t recall ever feeling compelled to point out what a great bass guitarist she is because, honestly, I never felt that way before. But she is freaking awesome on Trompe Le Monde, and so is David Lovering. Pixies’ rhythm section totally represents on this record. Another musical note worth making is the appearance of different instruments: a tabla (I presume) on “Space,” an organ on “Bird Dream of the Olympus Mons,” bits of piano on “Motorway To Roswell.” It’s not a string section, but for an unpretentious band like Pixies it’s an interesting creative development. Otherwise, this is an audible retreat from the expansive sound of Bossanova, a return to the self-amused punk music of Doolittle.

In their too-short lifetime, Pixies never released a merely good album. You could say the same for Velvet Underground. Each record was an important statement that made everything around it seem banal. Songs like “Trompe Le Monde,” “Planet of Sound, “Alex Eiffel,” “Space,” U-Mass” and “Subbacultcha” never changed the world. Instead, they invited you into Pixies’ world, a reflection of reality sculpted in brutal chunks of sound and mysticism mixed with the mundane, all of it rendered with a pervading sense of dislocation driven by a yearning for connection. From “Caribou” to “Debaser” to “Motorway To Roswell,” it was an amazing ride. They might have gone on for a few more albums, run out of gas like most bands, bickering in the backseat until the bitter end. But Black and the band never take their foot off the pedal, not even for a moment, on Trompe Le Monde. Swan song, my ass; this was self-immolation.

A1. Trompe Le Monde
A2. Planet of Sound
A3. Alec Eiffel
A4. The Sad Punk
A5. Head On (William Reid/Jim Reid)
A6. U-Mass
A7. Palace of the Brine
A8. Letter To Memphis
B1. Bird Dream of the Olympus Mons
B2. Space (I Believe In)
B3. Subbacultcha
B4. Distance Equals Rate Times Time
B5. Lovely Day
B6. Motorway To Roswell
B7. The Navajo Know