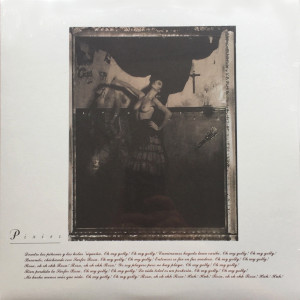 This is mescalina rock. When I hear it my heart leaps and the little iconoclast who pushes the buttons in my brain all day sits back and has a smoke and a snort of something like honeyfied hellfire. But the first time I heard it my head hurt. Took time before the trans-dimensional insanity of it all made sense. It was brilliance blurted out in such a way that it sounded like nonsense. But that didn’t explain away “Where Is My Mind?” and “Gigantic” and “River Euphrates” and suddenly the whole thing, even those pulverized guitar solos from Joey Santiago, made sweet beautiful love to both my ears. I can’t tell you why I stuck with Surfer Rosa long enough to see that or why so many other people did too. It’s a prickly set: luminous harmonies sometimes but mostly skinned knees and boney fists of fury. The whole thing sounds unfinished at first, but years later you can stare at it and see things and swear that it’s a craggy, cranky masterpiece where (no) not one sharp and dangerous object pointing out of it should be smoothed over. I’ve seen makeshift walls with broken bits of glass bottles and metal shards stuck into the cement on top and sometimes when the light hits it right you’d swear there was the soul of an artist in it. Well, the light loves Surfer Rosa too. The Pixies’ first full-lengther is a great alternative yardstick because the band constructed pop music from completely different material: shrieks and spanish and insane feedback. It rolled like a toxic tumbleweed out of Boston and its dark sense of humor left a mark on you afterwards. This is what it felt like when the Heads rolled in a decade earlier, only more turbulent and more beautiful.

The Pictures
Photography by Simon Larbalestier. Sleeve art direction and design by Vaughan Oliver at 23 Envelope.