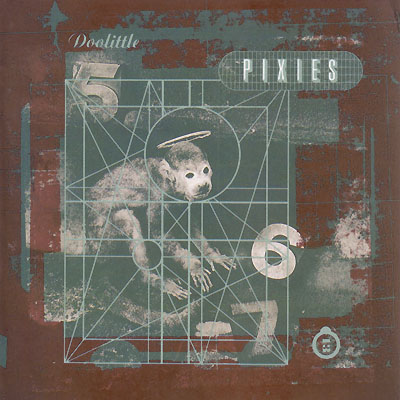 Probably their noisiest, punkiest album, this is the one all the hipsters own.

You know that voice that tells you to do strange things? This is it singing. Like Surfer Rosa, Doolittle didn’t do a lot for me in the beginning. It’s just so standoffishly strange; Pere Ubu meets Iggy and the Stooges strange. I used to listen to “Here Comes Your Man” and shrug my shoulders at the rest of it. Then I started to hear all the beautiful music in “Mr. Grieves,” “Debaser,” “There Goes My Gun” and “Dead.”

Doolittle may be the Bostonians’ most brutal, brilliant record. It’s free, it’s wild, it’s on the edge of everything and dancing like a loon. It’s not as funny as their first full-length record; this is gallows humor sung from the very core of angst. When Black Francis matter-of-factly states that he’ll “sail away on a wave of mutilation,” it’s said with such serenity that you realize how at home he is in the eye of the hurricane.

The method to Pixies’ madness is revealed in the opening track, which alludes to the Dali/Brunuel short, “Un Chien Andalou.” That famous film rejected the rational in favor of the grotesque subconscious: the violated body, decay, religious symbolism. The same principle powers Doolittle. You find it most on cuts like “Gouge Away,” “I Bleed” and of course “Debaser.” What really makes it for me though is Black Francis’ power as a preacher for the absurd. When he barks out the lines “I am un chien andalusia” or “if the devil is 6 then God is 7,” it’s like a man possessed by demons. Given how influential this album was, seems the least you can do is listen to it once.