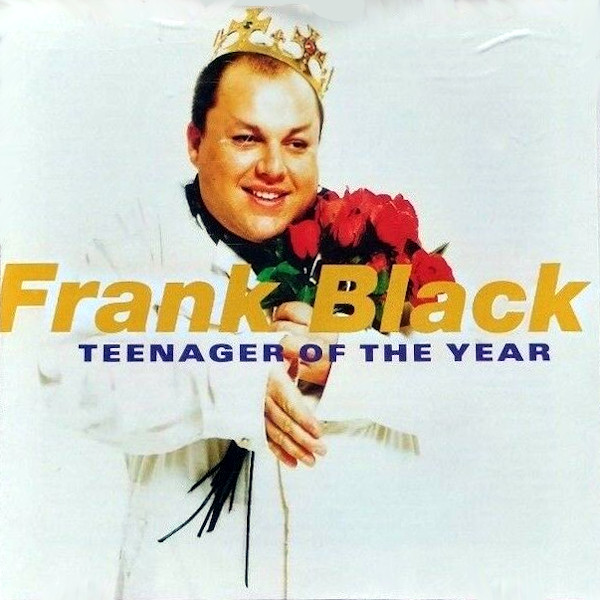 The cover photo is completely ironic. The title isn’t. “Teenager of the Year” was a real accolade Black earned as a teenager, and in many ways Teenager of the Year feels like a conscious effort to fulfill that early promise. Black holds nothing back. Every idea is taken to its logical conclusion, no morsel of his mad genius goes untasted. It is, if not his magnum opus, the most exhaustive exhibition yet from Charles Thompson the artist-person.

Frank Black was a business plan, setting the strategy for what would follow. Teenager of the Year is his money shot. (You know you’re reading a classy website when the porn references come before the second paragraph is finished.) Rolling Stone ranked it #28 on their list of top 40 alternative rock albums from 1994. That was, incidentally, a painful list to read and a fairly compelling argument for why the Nineties sucked it as a decade. It also earned a place in Pitchfork’s top 100 albums of the 90s, although I think we all know that the editors of Pitchfork are going straight to hell.

The Pixies comparisons are, of course, unavoidable. The sessions feature a quartet lineup most of the way that lines up with Pixies: a bass player (multi-instrumentalist Eric Drew Feldman), drummer (Nick Vincent) and lead guitarist (Lyle Workman, sometimes Joey Santiago). The rhythm section feels more or less the same as Pixies, but Workman is a different kind of lead guitarist and Feldman is a co-conspirator rather than a supporting player. The difference between Frank Black and his former band is his solo music digs deeper into traditional rock & roll than would be possible with a “punk” band. References to Elvis Presley (Pure Denizen of the Citizens Band) and Bob Dylan (Headache, Superabound) make up part of Black’s personality, not the Pixies’.

The Dylan comparison is sometimes striking, and I can’t help but feeling that Teenager of the Year is Frank Black’s Basement Tapes. I’m not sure I have the patience for either. Both albums had some great tracks; in fact, the first half of Teenager is nearly flawless. From the forced swallow of the poisoned pill on Whatever Happened to Pong? onward to the sublimely strange Thalassocracy (a transoceanic empire, and yes I totally had to look that up), the fiery mission statement (Freedom Rock), the sweet lullaby (Sir Rockaby), the unexpected mock reggae track (Fiddle Riddle), it’s a perfectly packaged box of chocolates.

The second half, unfortunately, has its share of dark chocolate creams. (This is where The Basement Tapes analogy comes in.) At first, I thought I had just overindulged on the sweetness, so I began listening to the second side first and, no, the ideas just aren’t as good. I Could Stay Here Forever and Big Red are keepers, the aforementioned tracks too, but I had the sense that Black had visited many of these ideas already. Where Teenager gloriously succeeds is in doing what so many others (Bob Mould, Paul Westerberg, David Lowery) failed to do: write a compelling sequel. Sugar never superseded Husker Du, Cracker never crested Camper van Beethoven, but Frank Black’s first two records are a fitting followup to Bossanova and Trompe le Monde. Live long and prosper, Pixie.

Japanese bonus disc
A1. Men in Black
A2. At the End of the World
A3. Oddball
A4. Headache (NYC version)
A5. Hate Me
A6. Amnesia