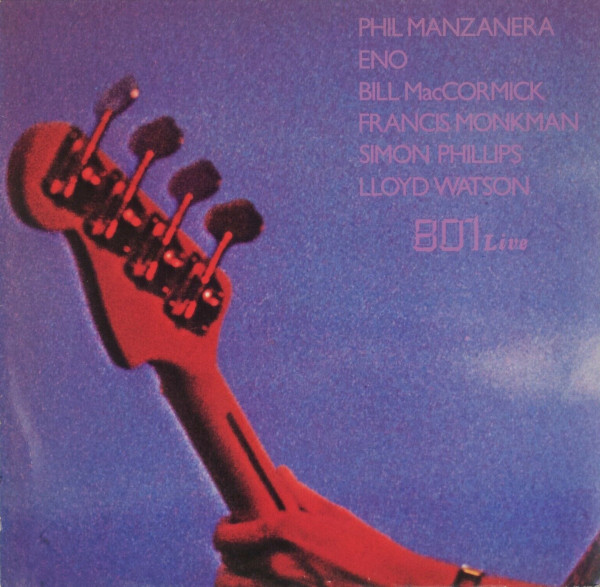 Even among Brian Eno albums this is a weird one: a live concert recorded by a group of musicians named after an Eno song and performing material from the recent albums by Phil Manzanera and Quiet Sun, selections from Eno’s first three solo albums and covers of The Kinks and The Beatles. Honestly, it makes June 1, 1974 seem like a perfectly logical affair.

First, a bit about the players involved. Manzanera and Bill MacCormick were members of Quiet Sun, which had recently released the well-received Mainstream. Lloyd Watson had played with Eno on his solo albums. Simon Phillips and Francis Monkman (ex-Curved Air) were invited to round out the band. Eno and Manzanera, of course, date back to Roxy Music. The group took their name from the Eno lyric, “We are the 801” (from “The True Wheel”).

The live performances are hit or miss, in my opinion. Their version of Tomorrow Never Knows is wonderful, but You Really Got Me is a bore. The songs from Diamond Head (Diamond Head, Miss Shapiro) are as good as you remember, and Eno does a fair job singing Rongwrong from Mainstream. That said, it’s hard to believe that, out of six players, none of them could sing better than Eno.

The performance is presented as a kind of mélange that blends the songs together. Lagrima seques into “Tomorrow Never Knows,” snippets of “Over Fire Island” appear at the end of East of Asteroid (itself a mixture of “East of Eden” and “Mummy Was an Asteroid…”), which moves smoothly into a lively version of Sombre Reptiles from Another Green World. Among the Eno vocal songs, Third Uncle nearly matches the original in energy but Baby’s on Fire is given an inexplicably obnoxious reading and Robert Fripp’s solo is sorely missed.

I’d call 801 Live a mixed success. For some people, Eno singing “Tomorrow Never Knows” will be worth the price alone. For others, this version of “Baby’s on Fire” will send you running back to the original. Given the paucity of live performances from Eno and the sheer talent in attendance, I’m thankful that someone had the presence of mind to record this for posterity. Still, you’ll want the original albums first before lifting up the carpet to see what time has left behind.