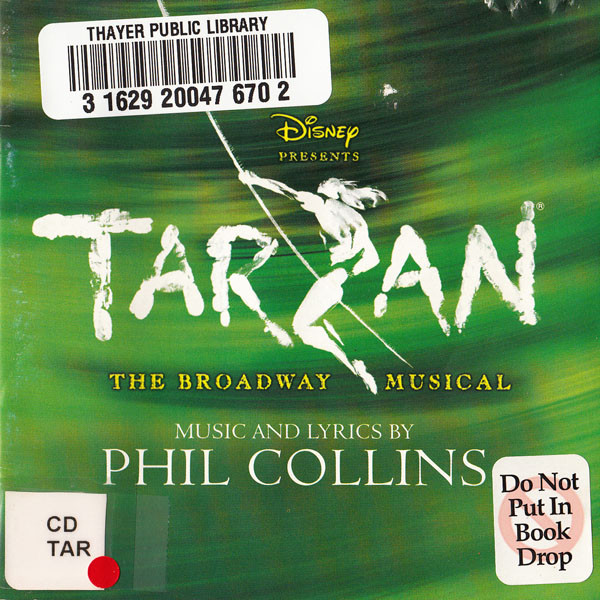 Kronomyth 12.0: The lion lies down on broadway.

Phil Collins followed in the footsteps of Elton John that led to Broadway for the stage adaptation of Tarzan. In addition to the four popular holdovers from the film (“You’ll Be In My Heart,” “Son of Man,” “Two Worlds,” “Strangers Like Me”), Phil wrote nine new songs for the musical and thought enough of one (“Everything That I Am”) to record it himself. I happened to see the musical on Broadway and thought it was very well done, although darker and more intense than the animated film.

Despite not having written for the stage before, Collins does a good job of writing material that combines action and interaction: “Who Better Than Me,” “Sure As Sun Turns To Moon,” “Everything That I Am.” Some of the score is forgettable, sure, but this is a Broadway musical we’re talking about, and most of those are yawnfests. While the songs have an unmistakable Phil Collins stamp (ballads, Motown and drums figure prominently), the man clearly tried to step out of his comfort zone and write material that would entertain and advance the plot at the same time.

The original cast members all have strong singing voices; Jenn Gambatese (Jane Porter) in particular is interesting for the vocal similarities she has to Annie Haslam (listen to “Waiting For This Moment”), which had me thinking how awesome a Phil Collins/Annie Haslam duet would be. Although he’ll probably never write another Broadway musical, Phil Collins approaches the project with the same care and craftsmanship he brings to most efforts, making this disc a nice supplemental choice to your standard Phil Collins collection. As an added bonus, the disc closes with Phil’s own version of “Everything That I Am,” which would have been a deserving choice for a single and is a discovery worth making.

Music and lyrics by Phil Collins.

Creative direction by Steve Gerdes. Album design by Add to the Noise. Cast photos by Joan Marcus and Heinz Kluetmeier.