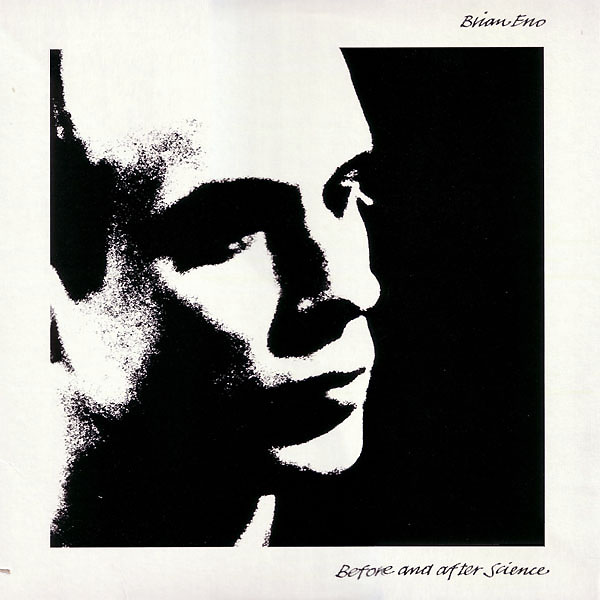 Not quite another Another Green World, but a final airing out of vocal ideas featuring Eno’s skewed pop/rock sensibilities.

Kronomyth 8.0: The last of the talkies.

Up to this point, the two sides of the ONE had been silence and silly chatter. Another Green World effectively merged the two. Before And After Science slipped back into the sweet futureworld of demented intellectual pop, a last hurrah and heidy-ho before the long journey into silent spaces.

The first side of Science anticipates Eno’s agitated, experimental work with Talking Heads (“King’s Lead Hat” is actually an anagram of their name). The second side features Eno the soft, soporific crooner. Some reference has been made (by others, more knowledgeable others, all-knowing fearless crevice-spelunking others) to Eno’s deconstruction of these songs in the studio, and there is a turning inside-out of the music, an exoskeletal approach to art-rock on “No One Receiving,” “Kurt’s Rejoinder” and “King’s Lead Hat.” Some of that can be attributed to the occasional rhythm section of Percy Jones and Phil Collins, who would go on to play together in Brand X.

While it may be tempting to see this as another Another Green World, there are only two instrumentals on Science: “Energy Fools The Magician” and “Through Hollow Lands” (the latter dedicated to Harold Budd). Rather, this album is at a crossroads between Talking Heads, the instrumental collaborations (Cluster, Harold Budd) and Eno’s own songbook to date. If mixed differently, the combination of agitation and sedation might invite closer comparison to Taking Tiger Mountain. Listening to this music thirty years on, it’s amazing how well tracks like “King’s Lead Hat” have held up. Looking back over thirty years of instrumental music (Wrong Way Up notwithstanding), it’s a shame Eno chose to forego making pop music after this album.

All songs written by Brian Eno unless noted.

Brian Eno (voices, synthesizer, guitar, synthesized percussion, piano, rhythm guitar, brass, chorus, ‘jazz’ piano, keyboards, vibes, metallics, Yamaha CS80, moog, bell, mini-moog, AKS) with Phil Collins (drums on A1/A4), Rhett Davies (agong-gong and stick on A1), Andy Fraser (drums on A5), Robert Fripp (guitar solo on A5), Fred Frith (modified guitar on A4, cascade guitars on B4), Percy Jones (fretless bass on A1/A4, analogue delay bass on A3), Jaki Liebezeit (drums on A2), Bil MacCormick (bass on B4), Phil Manzanera (rhythm guitar on A5, guitars on B1), Dave Mattacks (drums on A3/B1), Mobi Moebius (bass Fender piano on B3), Achim Roedelius (grand and electric pianos on B3), Paul Rudolph (bass and rhythm guitar on A1, bass on A2/A5/B1/B2, melody guitar), Kurt Schwitters (voice from the ‘Ur Sonata’ on A3), Brian Turrington (bass on B5), Shirley Williams (brush timbales on A3, time on B4). Produced by Brian Eno and Rhett Davies; engineered by Rhett Davies, Dave Hutchins, Conny Plank.