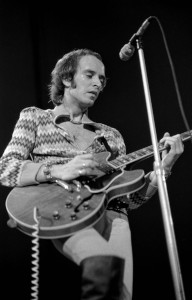 Peter Banks was the original guitarist in Yes, appearing on their first two records (although, oddly, not on the album cover of their second album, which was photographed after Banks had been replaced by Steve Howe). If that were the end of Banks, he might be a mere footnote in prog’s storied history. Instead, he forged on as a founder of the in-all-ways-excellent progressive rock group, Flash, releasing three albums with them. He was also one of the first progressive rock guitarists to release a solo album, Two Sides of Peter Banks.

Unfortunately, by the mid-Seventies Banks had largely faded from view. His next venture, Empire, failed to get a record deal, and the guitarist remained silent until a series of instrumental guitar records were released in the Nineties. The first of these, Instinct, is good as instrumental guitar records go. While his contributions to the canon appear destined to be overshadowed by an unfair comparison to Howe, Banks’ work between 1971 and 1973 is deserving of its own pedestal on which to be admired, apart from (if parallel with) the music of Yes. He passed on in 2013.

CAN I PLAY YOU SOMETHING? (1999)
Can I Play You Something / Bang-Crash / Peter Gunn / Hippie Loop / 14 Hour Technicolour Dream / You Better Move On / Beyond And Before (Demo) / Beyond And Before (What Bass Mix) / Lima Loop / Grounded / For Your Love / Flowerman (Demo) / Flowerman / Yesterdays / Electric Funeral (Demo) / Electric Funeral (Radio Fun Mix) / Cinnamon Touch / Get Yourself Together (Demo) / Created By Clive / Images of You And Me (Radio Fun Mix) / I Saw You (Bang-Crash) / No Time. Released on compact disc in 1999 in the UK (Blueprint, BP-301CD).