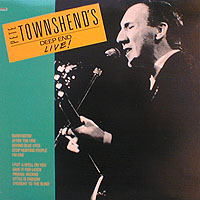 One of those “an intimate evening with the artist” affairs that eschews the expected for the unexpected. It’s unlikely anyone showed up in Brixton expecting live versions of “I Put A Spell On You,” “Barefootin’,” “Eyesight To The Blind” or The Beat’s “Save It For Later.” (For the record, Townshend’s acoustic reading of The Beat’s greatest hit sucks the charm right out a song that I could have sworn didn’t have a blowhole to suck from.) Originally released as a concert video, the elpee’s release appears to be an afterthought, “by popular demand” as the back cover claims. Maybe the video captures the scaled-back setting to better effect, but as an audio-only experience Deep End Live! doesn’t earn the exclamation point. There are some pleasant moments on here, including a warm reading of “I’m The One” and the unsinkable “Little Is Enough.” But “Behind Blue Eyes” and “Pinball Wizard” should kill in concert; they don’t here. As his first solo live album, even in its semi-official status, Pete Townshend’s Deep End Live! should have been a celebration of his solo music with a smattering of Who classics for good effect. Instead, Townshend takes the opportunity to step back from himself and deliver occasionally hot covers of R&B oldies. “I Put A Spell On You” is nearly spellbinding, “Barefootin’” kind of fizzles. If you find Townshend fascinating in any context, dive into Deep End without reservation. For my part, I find this an extracurricular indulgence I could live without, like those live performances for the Policeman’s Ball.