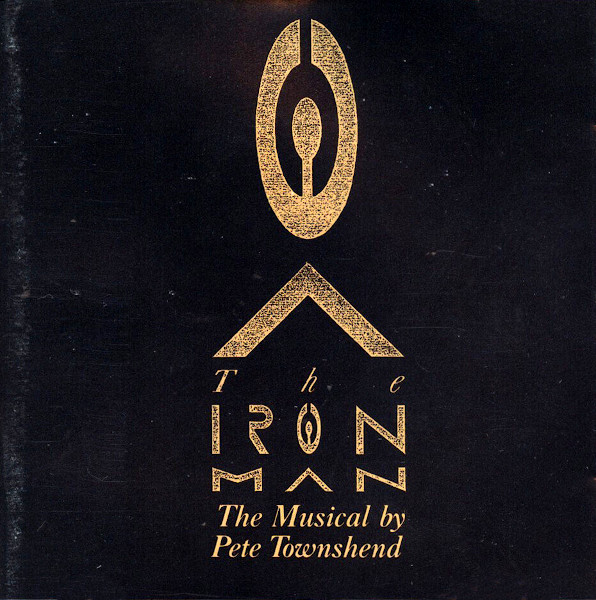 A musical based on the Ted Hughes story, The Iron Man, featuring Roger Daltrey and John Entwistle.

Okay, Who fans, you’ll want to have your programs out for this one. Pete Townshend is a ten-year-old boy (Hogarth) who befriends a large robot (The Iron Man, John Lee Hooker). Hogarth has a conscience (The Vixen, played by Deborah Conway) and a cadre of friendly woodland creatures (including Brother Simon as The Owl) to guide him. The Iron Man is first pursued by angry locals (led by Hogarth’s father, Roger Daltrey) and finally challenges a giant space dragon (don’t ask) to a duel, which frees Hogarth’s beloved.

The message here is, well, I have no idea what the message is. A Freudian might have a field day with a giant space dragon that harbors a beautiful young girl or a conscience called The Vixen. A Freudian with a lot of free time, anyway. This musical is based on Ted Hughes’ story “The Iron Man,” which I believe was adapted for an animated film here in the States. It’s wonderfully packaged, tastefully produced, intelligent, ambitious and, ultimately, baffling.

White City excelled as an album of new music and failed as a film. Psychoderelict tried to do both in the audio format and failed at both. The Iron Man stands somewhere in the middle. The songs lack the portability of White City but are infinitely easier to excise from the story than Psychoderelict. “I Won’t Run Anymore,” “Dig” (one of two tracks to feature John Entwistle and Roger Daltrey) and “A Friend Is A Friend” are what you would expect from a new Pete Townshend album.

Despite criticism to the contrary, I think the songs are strong. But hearing them sung by John Lee Hooker and Nina Simone separates them from Pete’s previous body of work. Some day, if Pete decides to tackle an “I Eat Heavy Metal” or “Over The Top” on his own, I’ll bet you it turns out pretty spiffy. On a lot of fronts, The Iron Man (The Musical) was doomed to failure before it took its first steps, but Townshend remains determined to elevate the musical medium. It’s a fitting occupation for a living legend, a holy grail worthy of the grey knight. If you’ve come this far in the adventure, don’t stop now.

All songs written by Pete Townshend unless noted. Original story by Ted Hughes.