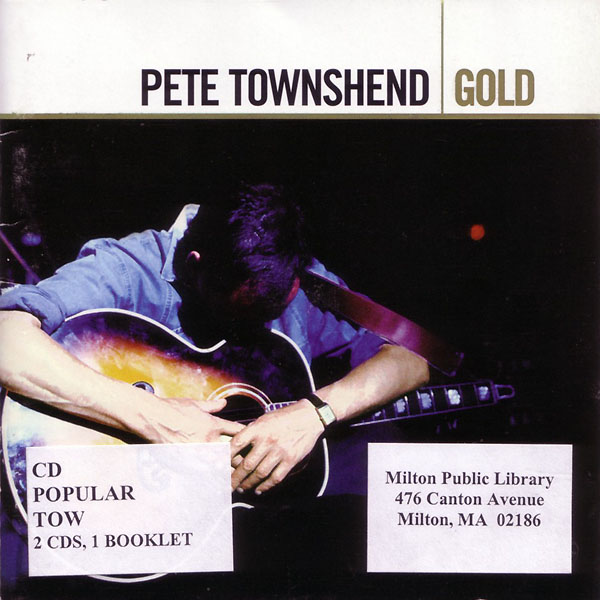 A double-disc retrospective that really shines. Nice summary if you want to know what Pete has been up to since The Who.

Amazingly, Hip-O Records found two discs’ worth of Gold in Pete Townshend’s solo catalog and put together what, to my mind, is the most compelling argument yet to take his singular body of work as seriously as The Who. The standard line on Pete Townshend is one of a musical visionary whose solo albums have suffered by comparison. There are the abortive early albums (Who Came First, Rough Mix), the post-Moon records when Townshend transferred The Who’s energy onto his own shoulders (Empty Glass, Chinese Eyes, White City) and the convoluted concepts bogged down with big ideas that didn’t materialize in the music (Iron Man, Psychoderelict). I own most of them and, honestly, I didn’t think there were two hours of gold in them. But I have now seen the future of the past, and that future is Golden. These are the relics deemed precious in value, separated from the impurities around them and restored to their original lustre. From Gene Pitney to Gene Vincent, Herman’s Hermits to Buddy Holly, historians have distilled outmoded artists down to their timeless essence and wrapped their treasures in historical context for future generations. That it happens here to Pete Townshend will cause the aging among us to reflect and, ultimately, to smile that our idol should shine so brightly. Its uninspired title notwithstanding, Gold should be a source of inspiration and emulation to future musical biographers. Be unapologetic about capturing an artist from his most flattering angle, it says. Forget about live albums, trivial arcana & archiva, single edits and soundtracks. Give ‘em the hits and the choicest cuts until they choke on the stuff and cry ‘Uncle.’ Imagine an Uncle Bryan Ferry: no Roxy Music, no pointless mixes, five tracks from Let’s Stick Together. Or an Uncle George Harrison: no Beatles, seven songs from All Things Must Pass interspersed with overlooked album tracks like “Beautiful Girl” and “Save the World.” It turns out that historians have been doing things by halves when what’s really required is a two-disc overview of the essential album cuts. Nothing in Townshend’s catalog bespeaks his genius better and brighter than Gold. Let the fans scoop up the archival works and live albums; let the rest of us feast first on these, his gilded fruits. (Hip-O slippo: the closing “Parvardigar” is actually cut off as the second disc reaches its time limit.)

Original 2CD Version
A1. English Boy
A2. Secondhand Love
A3. A Little Is Enough
A4. Heart To Hang Onto
A5. Sheraton Gibson
A6. The Sea Refuses No River (Pete Townshend/Alan Rogan)
A7. Brilliant Blues
A8. Now And Then
A9. I Won’t Run Anymore
A10. Keep Me Turning
A11. Let My Love Open The Door
A12. Slit Skirts
A13. A Friend Is A Friend
A14. Let’s See Action
A15. Street In The City
A16. Empty Glass
B1. Rough Boys
B2. Give Blood
B3. Exquisitely Bored
B4. Jools And Jim
B5. Crashing By Design
B6. Don’t Try To Make Me Real
B7. Face The Face
B8. Uniforms (Corps d’Esprit)
B9. My Baby Gives It Away
B10. Outlive The Dinosaur
B11. Keep On Working
B12. White City Fighting (Pete Townshend/David Gilmour)
B13. All Shall Be Well
B14. Time Is Passing
B15. I Am Afraid
B16. Misunderstood
B17. Pure And Easy
B18. Parvardigar (Pete Townshend, adapted from Meher Baba’s Universal Prayer)