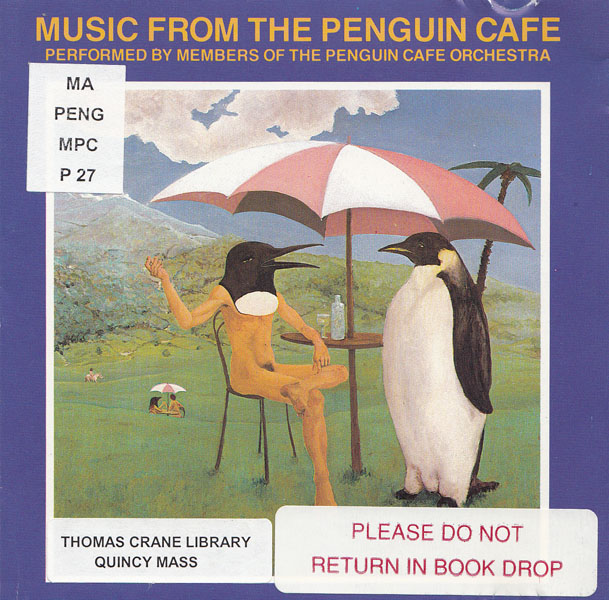 After listening to this record, you’ll wish there was more classical music scored for ukulele.

Kronomyth 1.0: The only emperor is the emperor penguin of ice cream.

The early songs of Eno notwithstanding, this is some of the silliest music to be released under the serious E.G. imprint. Penguin Cafe Orchestra is the brainchild of Simon Jeffes, a sort of walking one-man band who conscripted a trio of Helen Liebmann (cello), Gavyn Wright (violin) and Steve Nye (electric piano, mixing) to make mostly instrumental music that sounded like a cross between Anthony Phillips, John Cale and The Residents.

The first album is at least partially grounded in the avant-garde, featuring a couple Nico-esque turns from Emily Young (“Coronation,” “Milk”). Yet the real revelation comes in the joyous music they make when all pretensions to art drop: “Penguin Cafe Single,” “From The Colonies,” “Giles Farnaby’s Dream.” These songs have a childlike mirth (really, that’s the best I can do, “childlike mirth?”) that quickly gets under your skin and builds up enough goodwill to make their excursions into avant-garde territory tolerable. The second album all but eschewed the latter in favor of the former (it was an almost palpable eschewiness, as I recall, which reminds me: buy a dictionary), while the third barfed up the serious bits it had been eschewing and swallowed them again (that sentence was bound to come to no good).

Recorded in 1974 and 1976, Music From The Penguin Cafe is a contemporary of Eno’s Another Green World; if that album felt like a studied work (and it did), Music could be viewed as its understudy: some ideas based on a simple melody and expanded, others picked up and quickly dropped, one or two polished and put into the pockets as a keepsake. For years, Music was a solitary curio, followed by a delightful and unexpected followup in 1981, after which the Orchestra became a regular gig for Simon Jeffes. I typically come back to the first when I’ve exhausted the second, then onward to the third and/or back into the arms of Cale, Eno, etc. It’s more fun than Anthony Phillips’ Private Parts and more accessible than The Residents (most things are, really), plus there are few things in life more pleasant than a well-timed ukelele part, so feel free to explore this Music (though the sequel is the better place to start).

Words by Neil Rennie except “Milk.”