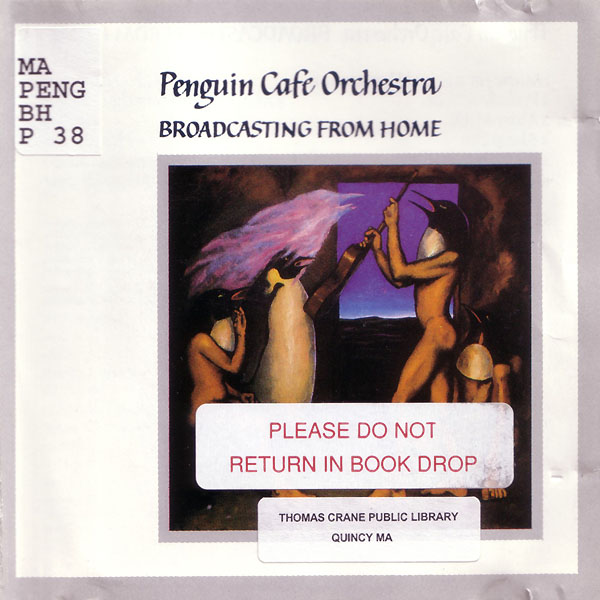 A slightly more serious work than albums past, but still charming in its unique ukelele string quartet way.

Not the sanguine café orchestra of their second album, Broadcasting From Home is similar in sound but more atmospheric and restrained. Now, a restrained penguin (boing) you would say is no fun. There are some light moments on here (“Music For A Found Harmonium,” “Heartwind,” “In The Back of a Taxi”), but nothing as joyous as “The Ecstasy of Dancing Fleas” or “Penguin Cafe Single.”

Recorded over two years and featuring much of the same cast as the first two albums, Broadcasting is clearly part and parcel of Penguin Cafe Orchestra‘s original vision: mixing serious and non-serious instruments together into short songs that sound like sunlight in your ears. Only it’s a dappled sunlight this time, interspersed with passing clouds. A song like “Air,” featuring heavy harmonium and made of mist and lost sailors’ souls, or the stationary “White Mischief” gives the album a stilted feel suited to an E.G. artist (Brian Eno, Harold Budd).

Despite the more serious tones and addition of new elements like horns, Broadcasting isn’t a step forward so much as a step back from the joyous, toyous music of the second, eponymous album. When you have at your core three quarters of a string quartet, a certain amount of high-mindedness is to be expected. And not everything needs to be ukelele and milkbottle, as the excellent “Isle of View” demonstrates. Ultimately, Broadcasting is a good album in PCO’s by-now-familiar idiom that inches toward respectability. It’s not the arresting oasis you might remember, but there’s still rest and refreshment to be had here.