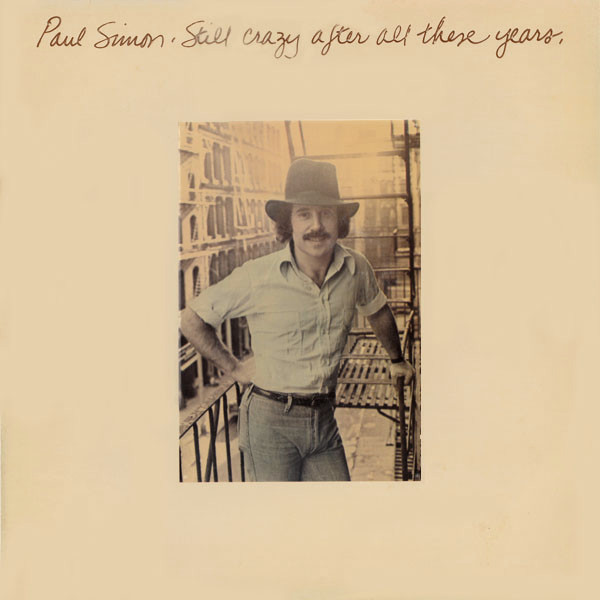 The perfect soundtrack to the mid-Seventies malaise of low morals and high prices.

Paul Simon’s divorce from his first wife set the stage for the bittersweet, beaten, yet occasionally brilliant Still Crazy After All These Years. The album is typically eclectic but a little less impressive than his last two albums. Then again, it did win the Grammy for Album of the Year, so obviously somebody was impressed with it.

I’ve always seen in the album’s songs a mirror for the mid-Seventies malaise in America. In a society where free love had become free sex, and where the national outcry had shifted from the cost of war to the price of gasoline, Simon the White Knight of American Idealism was fading into something of a red, white and blue cynic. The jazzy opening title track, said to be inspired by Simon’s study under Bill Evans bassist Chuck Israels (a claim I can’t deny or confirm), sets a complicated and troubled tone that persists throughout the album. It’s a powerful song, and the moment following the line “It’s all gonna fade,” where the song seems to come unstuck from reality and float in the sweet limbo of remembrance, is one of those indelible moments in music that everyone should hear.

Over the next few songs, Still Crazy would seem to be his crowning achievement: a much-anticipated reunion with Art Garfunkel on “My Little Town,” the perfectly McCartneyesque “I Do It For Your Love” and the insidiously funky “50 Ways To Leave Your Lover.” After that, however, the deluge of depression: the elegiac “Night Game,” a surprisingly flat gospel duet with Phoebe Snow, “Gone at Last,” a return to the title track’s haunts, “Some Folks’ Lives Roll Easy,” and so on. By album’s end, the man who once called himself Jerry Landis sounds more like Jeremiah the weeping prophet.

It’s still a good album, and it would be five years before Simon made another (the quasi-soundtrack One Trick Pony), but if you’re looking for the year’s best album, listen to The Hissing of Summer Lawns, Fleetwood Mac, Toys in the Attic, Physical Graffiti, A Night at the Opera, etc.

All songs written by Paul Simon.