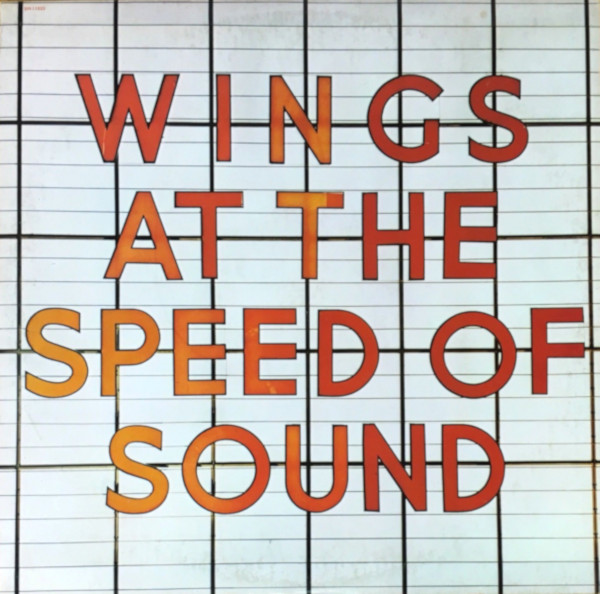 Paul pulls a page from Elton John by releasing a mediocre album with two great songs on it.

For better or worse, Wings was Paul McCartney’s backing band. Paul sought to change that perception by balancing the band’s contributions on Wings at the Speed of Sound, only it backfired. There’s little debate that the best moments on here occur when Paul is front and center: “Let ‘Em In,” “Silly Love Songs,” the second half of “Beware My Love.” The rest of the record is uneven, by turns sleepy and clever, more or less what you could expect from 10cc at this stage.

That’s not to say the material is far removed from what came before (Venus and Mars) and after (London Town). You can even draw a line from some of this to such classics as Band on the Run (compare “San Ferry Anne” to “Mamunia”) and Abbey Road (“The Note You Never Wrote” sounds a lot like “You Never Give Me Your Money”). But the recurring reference point for me is the weaker side of Venus and Mars, such as “Medicine Jar” and “Spirits of Ancient Egypt.” The idea of giving drummer Joe English something to sing is cute—he has a better voice than Ringo at any rate—and Jimmy McCulloch proves a fair match for Laine as a singer and songwriter. Linda, unfortunately, is given the outmoded (in sound and sentiment) “Cook of the House” and the worse half of “Beware My Love” to sing. (Insert Yoko Ono joke here.) The record ends with a creaky piano ballad from Paul, “Warm And Beautiful,” that sounds only marginally better than John Lennon’s homemade tape of “Grow Old With Me.”

When the record was released, “Let ‘Em In” and “Silly Love Songs” had a stranglehold on the radio, which was enough to vaunt this to the top of my Christmas list that year (and you can imagine my delight at seeing this and Band on the Run side by side under the tree). Turns out, like a certain Caribou, that the hits were the meat of the matter, and everything around them was filler. Following the Wings Over America tour, this version of the group split up, and Wings was back to being a trio, at least until Back to the Egg. But that’s another story.

A1. Let ‘Em In
A2. The Note You Never Wrote
A3. She’s My Baby
A4. Beware My Love
A5. Wino Junko (Jimmy McCulloch/Colin Allen)
B1. Silly Love Songs
B2. Cook of the House
B3. Time To Hide (Denny Laine)
B4. Must Do Something About It
B5. San Ferry Anne
B6. Warm And Beautiful

2CD reissue bonus disc
B1. Silly Love Songs (demo)
B2. She’s My Baby (demo)
B3. Message To Joe (vocoder track)
B4. Beware My Love (John Bonham version)
B5. Must Do Something About It (Paul’s version)
B6. Let’ Em In (demo)
B7. Warm And Beautiful (instrumental demo)