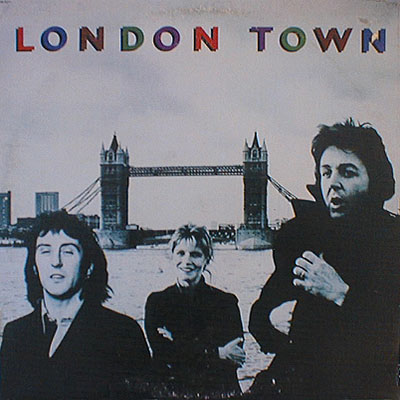 An understated and probably underrated album featuring a lot of good ideas (many from Denny), acoustic guitars and electronic keyboards.

Kronomyth 8.0: Wings at the speed of slowing down.

By the time the album was released, Jimmy McCulloch and Joe English had both left Wings. Neither leave much of an imprint on London Town, which is likely to happen when you’re not around for the final mix. I can’t recall a single electric guitar solo on the album, and English was never a flashy drummer. Their absence is opportunity for Denny Laine, who cowrites much of the material this time and takes lead vocals on both “Deliver Your Children” (a far prettier turn than “Richard Cory”) and “Children Children,” a song that would have felt right at home on a Moody Blues record (and not simply because of its title). If Paul McCartney shines on this album, Laine shines right along with him.

London Town ends up being a very different record than their last studio effort, Wings at the Speed of Sound. Where Speed had two perfectly polished hits, the hits on London Town are understated. Speed could have used a few more good ideas; London Town almost has too many. “Girlfriend,” “I’m Carrying” and especially “Backwards Traveller” would have benefited from more attention. Michael Jackson seems to have understood the potential of “Girlfriend” better than McCartney, delivering a great version on Off The Wall. Instead, Capitol released “I’ve Had Enough” as the third single, which is a great song in the tradition of “Helen Wheels” but, again, a bit underdone considering how awesome it should have been (and how desperately the henpecked need an anthem other than “Take The Long Way Home”).

In its surfeit of good ideas and casual production, London Town points back to the earliest McCartney albums while taking advantage of modern studio techniques (electronic keyboards, improved multitracking) to achieve a sort of Beatles lite effect. In fact, more than a few of these songs reminded me of Paul’s contributions to his former band (“Café on the Left Bank,” “Famous Groupies”). I’m not saying it’s as good as all that; rather, it’s a welcome reminder that Paul McCartney could still be counted on for an album’s worth of good ideas with at least a handful of winning melodies. Together with Back to the Egg and Tug of War, London Town finds a workable formula for Paul’s ideas that carried him strongly through the early 80s.