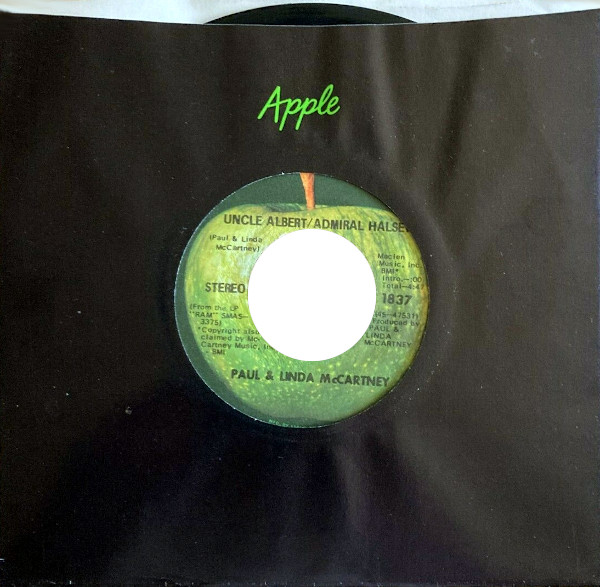 The first of Paul’s post-Beatles patchwork epics, this is the best thing he’s written since Abbey Road.

I find it astounding that some people don’t love this song. For me, UA/AH most approached the joy I felt when listening to The Beatles; more than “Instant Karma,” more than “My Sweet Lord.” It’s the first of several expert patch-jobs from Paul McCartney that fused disconnected melodies into miniature pop masterpieces. (He would repeat the feat over the years with “Band on the Run” and “Venus & Mars/Rock Show.”)

The flip side is another winner, “Too Many People,” which rocks harder than anything else on Ram (and would have actually been my choice for the second single). Ounce for ounce, this is one of McCartney’s more magical singles. Incidentally, I have no idea what “Uncle Albert/Admiral Halsey” is about. Paul did have an actual Uncle Albert, and both “Uncle Albert” and “Admiral Halsey” were conceived separately, so I’ve always approached the song as a jumble of midday reveries.

Note that, according to Tim Neely and his absolutely indispensable “Goldmine Price Guide to 45 RPM Records (3rd ed.),” two additional variations of the original Apple release exist: with “Paul” misspelled on the producer credits and with an unsliced apple on the B side. The author/historian goes on to catalog a 1975 reissue, distinguished by the inclusion of the words “All rights reserved” on the label, which I haven’t seen for myself, although there are numerous label variations featuring different placement of text (e.g., “stereo” on the lefthand and righthand sides, etc.).

Released on 7-inch single on August 2, 1971 in the US (Apple, 1837) and Australia (Apple, A-9669); reached #1 on the US charts (RIAA-certified gold record). There are several label variations that feature different text placement, which apparently have to do with where (and not when) they were printed.