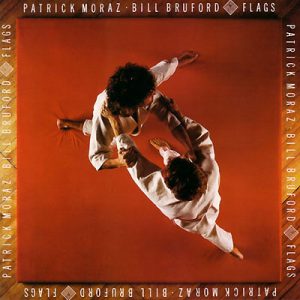 The second and last album from Moraz and Bruford, seeing as how the pair had plumbed their musical possibilities after two albums of improvisational jazz. Flags is probably the better of the two efforts. I say “probably” because my slightly more favorable disposition to Flags could simply be the result of well-tempered expectations. Music For Piano And Drums was somewhat unexpected: a dry and academic approach to the music that Moraz and Bruford were making on their own. Coming from the perspective of this Music, I’m more likely to salute Flags as a successful fusion of their individual styles in a ready-made jazz mold. Moraz still sounds like a poor man’s Chick Corea: Latin themes, lots of notes, a surfeit of synthetic sounds some of the time. Bruford gets in better beats this time, so that the pair remain on equal footing. Highlights include “Karu,” in which Moraz does a very good Vangelis impersonation, and the closing “Everything You’ve Heard Is True.” When listening to Flags (and the earlier Music), I’m apt to think my time would be better spent in the company of Wakeman, or especially sailing the solo catalog of Bruford. One of a Kind and Gradually Going Tornado are far more fun; even the moody Earthworks stuff has more to capture the imagination. Flags is best left to well-heeled wonderers who don’t mind spending $20 (and forty minutes) to answer the musical question: What are Bruford and Moraz up to now? Otherwise, you’d really need to buy into the idea that Moraz and Bruford are capable of frequent, spontaneous jazz genius to pledge any kind of allegiance to this album.

The Pictures
Photography by Gered Mankowitz; design and art direction by Rob O’Connor for Stylo Rouge.