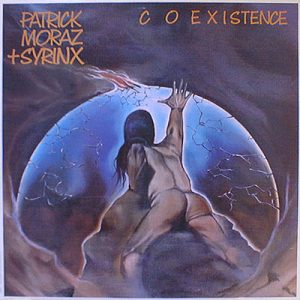 Ah, the pan flute: the thinking man’s kazoo. Not to belittle the artistry behind Syrinx’ muse, but there’s a reason young boys and girls aren’t chapping their lips late at night practicing the pan flute. Patrick Moraz’ spacey synthesizers and Syrinx’ antiquated instrument make strange bedfellows on Coexistence, although some of the time they also make beautiful music together. On the first side, the music might be too beautiful for some tastes, like “Boonoonoonoos” (which, I kid you not, would have worked well on Sesame Street) and the new age/muzak sounds of “Mind Your Body.” The side-long “Coexistence” suite is a better match for Moraz, allowing his advanced arsenal of synthetic sounds to shine, with Syrinx eschewing his delicate touch for an aggressive, jazzier tone. Other electronic keyboardists, Vangelis among them, have made the mistake of pairing raw and primitive sounds with electronics, perhaps overestimating the expressiveness of their own instruments. Usually, too wide a chasm exists between the two, and the primitive components come off sounding hokey, the futuristic components bloodless. That said, the “Coexistence” suite does arrive at an organic union, and Moraz fans will appreciate the idea and the effort. As for the first side of music, it may appeal only to the Yanni- and the Tesh-less. Unless you thought the Jon Anderson/Vangelis ventures were a good idea (and some did), save your money for something less flutey, like Story of I.

The Pictures
Illustrations by Aliocha, Phildius.