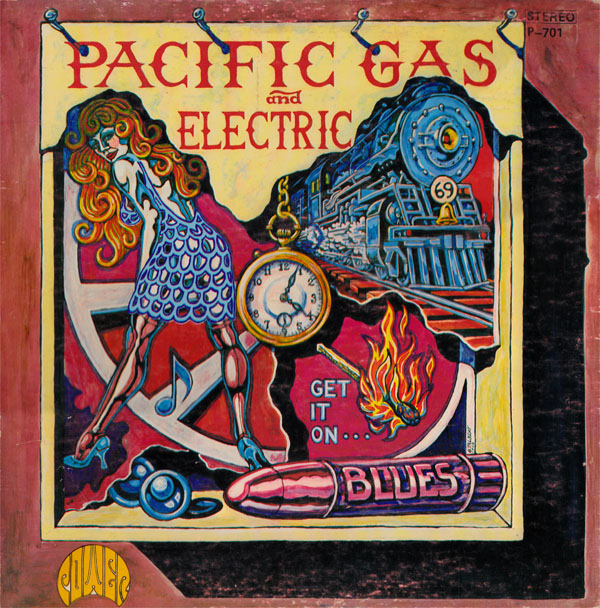 Electric blues rock powered by the vocals of Charlie Allen and the guitar of Glenn Schwartz.

The first time I reviewed this album, I wasn’t that impressed. No doubt, Charlie Allen was a force and Glenn Schwartz was as good a lead guitarist as you could hope for, but the material didn’t set my soul on fire. A decade later, I tuned into it again and Get It On blew me away. Every groove of that album bled molten fire. I hung on every solo from Schwartz, and Allen owned every word.

There are only a few original tracks on the album: Long Handled Shovel, Stormy Times and Live Love. They’re good, but none of them have stuck with me over the years. The cover material, however, is a different story. I never thought I’d hear a version of Wade in the Water that could hold a candle to The Graham Bond Organisation, but Pacific Gas & Electric come real close. Cry, Cry, Cry (Bobby Bland), The Hunter (Albert King), Motor City’s Burning (MC5) and Jelly Jelly (James Cotton) are just dead-center on.

PG&E were clearly destined for big things, including a new contract with Columbia Records. That Charlie Allen didn’t become a household name, well, I couldn’t tell you why. He has to be the best drummer-turned-singer in the history of rock & roll. The rest of the band completely nails it, and Glenn Schwartz’ solos must have left The James Gang kicking themselves for letting him go. If you enjoy the electric blues, you need to plug into Pacific Gas & Electric’s Get It On.

All tunes in this album arranged by The PG&E.
*Yes, that should be “Marshall.”