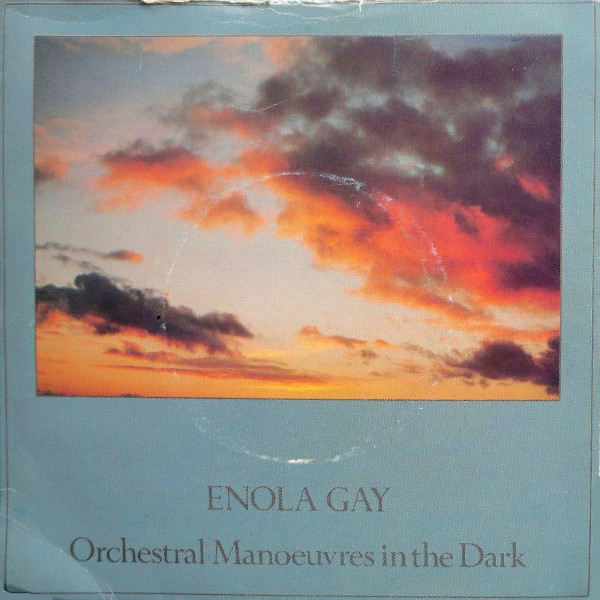 Hiroshima Mon Amour was the name of a 1959 film by French director Alain Resnais. It’s an odd juxtaposition, love and nuclear annihilation, until you recall that the bomber in the Hiroshima attack was named after the pilot’s mother (Enola Gay) and the bomb it dropped was called “Little Boy.” In the subsequent Nagasaki attack, the bomb was named “Fat Man.” Leave it to the land of the free and the home of the slaves to put an Oedipal twist on genocide.

In 1977, Ultravox released a song entitled “Hiroshima Mon Amour.” Perhaps taking their inspiration from the song, OMD released Enola Gay several years later. Although OMD’s song is clearly about the bombing of Hiroshima, the song’s romantic delivery likely meant that the its dark message flew over more than a few heads. Regardless of whether or not the message hit its target, “Enola Gay” is an early synthesizer classic that has aged remarkably well (the video, not so much), particularly its pioneering use of electronic drums.

The B side in most regions was the non-album Annex, a dream-like track that’s heavy on atmosphere but doesn’t feel fully baked. The main melody, for example, seems to consist of two notes for much of the way, with percussive sounds layered on top. Generally speaking, the material on Organisation is much better than this B side would have you believe. FYI, the title alludes to annex the verb, not the noun. Kind of a WWII theme going on there.