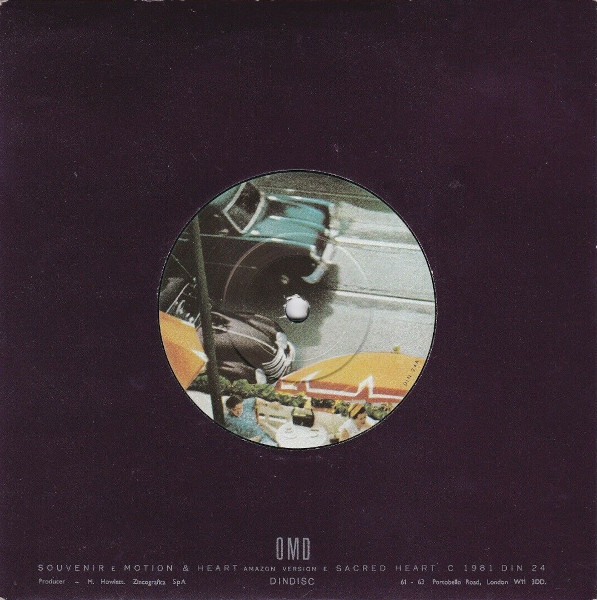 The first of several keepsakes from the band’s most memorable album.

I remember when this song came out. It was the first example of romantic, electronic dream pop I could recall, like Brian Eno meets Ultravox (which, of course, he did several years earlier). Pop music is a continuum, and you could connect the dots between “Golden Hours” and “I’m Not In Love” and “Souvenir” and “Wonderland” if you wanted to. So Souvenir wasn’t created in a vacuum, but in 1981 it felt that way, as it didn’t sound like anything else, even the earlier OMD albums.

Architecture & Morality was a brilliant departure from the fist two albums in that it tapped into the band’s heretofore untapped romantic appeal. Unfortunately, it ushered in an age of breathy, new romantic nonsense (“So In Love,” “Forever Live and Die”), though not before the band committed commercial suicide with Dazzle Ships. “Souvenir” also featured a pretty cool music video, with Paul Humphreys singing from a balcony, Andy McCluskey driving a red sportscar and nobody (mercifully) dancing.

The single was originally released in a 7-inch and a (then stylish) 10-inch version, the latter featuring a longer version called Extended Souvenir. It’s not an extended remix, but rather extends the pleasure of “Souvenir” for an extra minute (thank you). The flip side included two (!) tracks: an updated version of “Motion & Heart” that adds a bit more sonic detail to the original, and the breathy, dreamy Sacred Heart. The fact that songs like “Sacred Heart” and “Navigation” didn’t make the original cut for Architecture & Morality underscores what a creative period this was for the band.

For my money, “Souvenir” and “Joan of Arc/Maid of Orleans” were two (or three) of the best songs released in 1981. OMD never equalled them, so maybe it was cosmic serendipity. Whatever the cause, they’re some of my most-cherished souvenirs over a lifetime of listening.