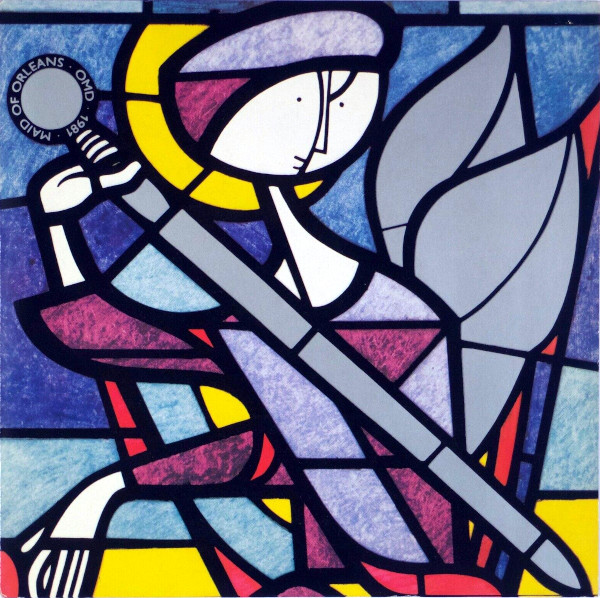 The stuff that dreams (and musical heroes) are made of.

Somehow, inexplicably, when OMD turned “Joan of Arc” into a waltz, it became the otherworldly Maid of Orleans. Of all the things they’ve made, nothing has ever approached this in beauty. Sure, “Souvenir” is a great song and the original “Joan of Arc” is no wallflower, but “Maid of Orleans” is a heroine for the ages. That it came packaged in one of the classiest picture sleeves of all time only seemed fitting.

The B side was a nonalbum track, Navigation, a fugitive from the same dreamworld. Although “steampunk” was still years away, OMD’s Architecture & Morality period perfectly captured the idea of Victorian romance mixed with modern technology. In that sense, “Navigation” could be seen as one of the earliest steampunk songs. Those who shelled out for the 12-inch, like me, got an even bigger surprise, Of All the Things We’ve Made. Again similar in style, though this time more clearly influenced by Brian Eno’s soporific pop songs (e.g., “Golden Hours”), “Of All the Things We’ve Made” might be my second-favorite OMD song behind “Maid of Orleans.” The band liked it enough to add it to the end of their next album, Dazzle Ships.

These days, I rarely listen to this single without thoughts of what might have been. Vienna, Architecture & Morality and Icehouse all pointed to a bright future that never arrived. Within a few years, new wave had devolved into synthetic pop, the grand dream of the romantic machines forgotten. Yet, for a moment, the new wave had achieved a momentous victory in my mind, martyrs in a musical revolution that ended as all revolutions do, in an exchange of ideals for idols.

Sleeve by Peter Saville & Brett Wickens from a stained glass by Anton Wolff.