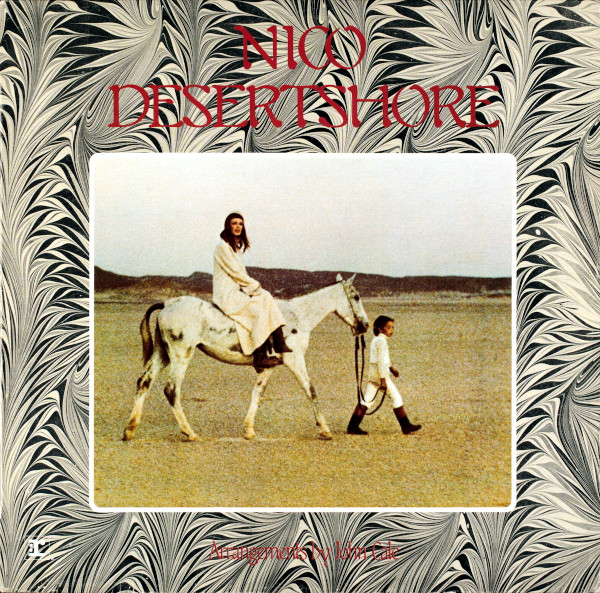 Nico and her horrorshow harmonium return to their nightmare world for another album.

Nico’s kindertotenleider is an acquired taste. Arched high in a tower of her own design, her stilted plainchant (delivered in English and German) naked save for the bone-dry touches of harmonium, piano and violin, Nico might well be Europe’s answer to Yoko Ono. And yet Desertshore is an affecting album, sweet and sad, an emotional wasteland peopled with malformed musical creatures long since adapted to the harsh conditions.

I’ve always believed that Nico was an underrated talent, doomed to be remembered by many as a footnote in the Velvet Underground’s tempestuous history. While John Cale produces and plays on Desertshore, this is not a continuation of the music found on Velvet Underground & Nico (only the closing “All That Is My Own” would come close to qualifying as a Velvets track). She is alone in the world of Desertshore; even when a child’s voice steps forward on “Le Petit Chevalier,” it’s as if from a dream remembered rather than the actions of a flesh-and-blood companion.

Lyrically, Nico is more drawn to musical incantation than the observational style of Laurie Anderson, who otherwise started out on a very similar path. Both could be called minimalists, but Nico existed as a sort of banshee in the beau monde, while Anderson sought to turn the beat experience into a multimedia experience. Pulling individual songs from Desertshore misses the point, but “The Falconer” and “Mutterlein” (one of two tracks here that appeared in the Philippe Garrel film “La Cicatrice Interieure,” as did Nico herself) are a good indication of the disc’s merits.

All selections written by Nico. Arrangements by John Cale.