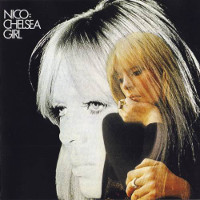 Bah! A petticoated pig in lipstick, this. Nico’s first solo album out of the Underground was a powerful declaration of artistic integrity… that the record label crapped all over in the form of encroaching and annoying strings and flutes. You can hear how special Chelsea Girl should have been on the simply adorned “Eulogy To Lenny Bruce.” Now, that isn’t to say that the orchestral touches don’t have a marzipan charm to them, especially on “These Days” and “Chelsea Girls.” In fact, listeners already familiar with “The Fairest of the Seasons” and “These Days,” both prominently featured in the film The Royal Tenenbaums, might have a hard time imagining this album without strings. But the added orchestration, done without the knowledge or consent of Nico, completely obscures her original artistic vision. I mean, who would listen to a line like “excrement filters through the brain, hatred bends the spine” (from “Wrap Your Troubles In Dreams”) and think yeah, a flute would go great right here? The genius of Nico is like a rose in the desert. Her music depends on aridity and a certain rigidity. Her later albums capture this, but they don’t feature the standout songwriting of Chelsea Girl. Jackson Browne’s contributions in particular shine, which is pretty amazing given the fact that the album’s other songwriters are named Lou Reed, John Cale and Bob Dylan. Chelsea Girl was supposed to be Nico’s coming out party, not Nico done up as some 60s party doll like New York’s answer to Marianne Faithfull. It’s still a beautiful record because all the ugliness is audible underneath, but it’s ultimately a flawed gem for the very reason that Tom Wilson and the labels tried to cover up the flaws. Someday, someone should release this album in an expanded with/without orchestra mix, if only to give Nico’s debut its due.

The Picayune
“Wrap Your Troubles In Dreams” is mistakenly attributed to John Cale on the UK elpee release. The song was originally recorded by The Velvet Underground as a demo.