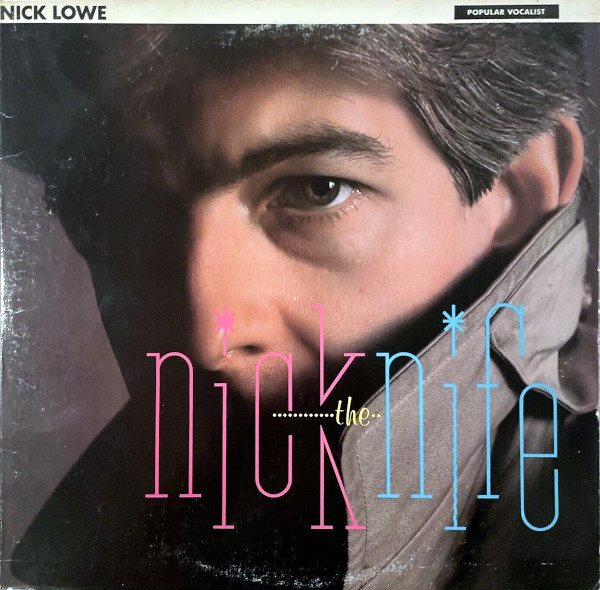 A dozen new ditties from the sharp mind of Nick Lowe.

Not as sharp as first two records, which is fine if you’re soft like butter on the guy. I am, so I’ll tell you that My Heart Hurts, Raining Raining and Too Many Teardrops cut right to the core of Lowe’s appeal. But you might miss the edge of “And So It Goes” or “Cruel To Be Kind.” Those were transcendent pop tracks. Knife doesn’t have any. It gets under your skin like a Dave Edmunds album might, but at his best Nick Lowe is cleverer than this.

That said, you can’t make a case for Labour of Lust as a great album without showing some respect for Nick the Knife; too little separates them. Excise “Dose of You” and “Cruel To Be Kind” and the two records compare favorably. Knock Knife and Labour’s foundation crumbles. Granted, nothing on his last record was as dumb as Ba Doom, nothing as plainly poached as Let Me Kiss Ya, but those are minor offenses. Lowe is such a lovable scruff, after all, and atones for it so sincerely on the sentimental tracks that he sometimes seems the second coming of Smokey Robinson. Or is it a smokescreen for the fact that Lowe’s original compositions sound less original with each new album?

Nick the Knife is easy to swallow, no one is denying that. No one is rushing to praise it as the equal of his first two albums either. Once again, we see the knife cut both ways: the rise of a new talent purchases its own fall. (I should be writing fortune cookies with a pair of ragged claws.) It was a slow descent; I didn’t come out of the clouds until His Cowboy Outfit. The point of all this being to go ahead and buy Knife if you like Nick.