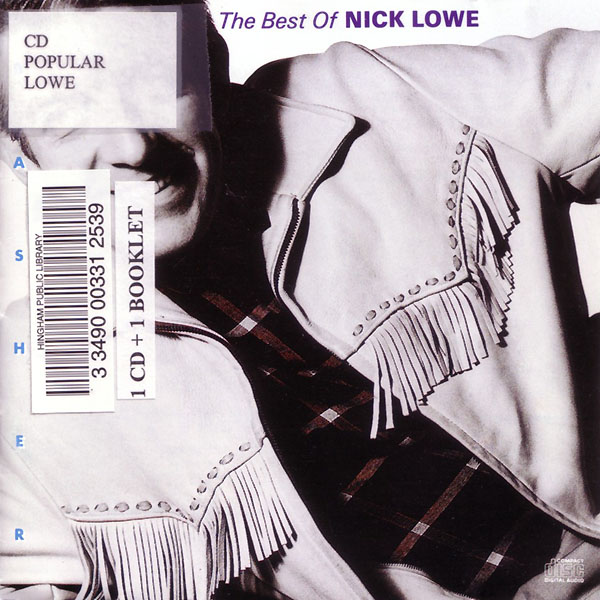 Every few years, somebody gets the bright idea to anthologize Nick’s better bits. At the time (1989), Basher was their brightest idea yet: 25 hits, misses and minor scrapes on a single disc (16 was the previous all-time high for Lowe). Of course, Nick’s solo career has never commanded his full attention, and some of his best work appears outside the scope of Basher on albums by Brinsley Schwarz, Elvis Costello and Dave Edmunds (it does reach into Rockpile’s quarry for the charming “When I Write The Book”).

What Basher provides is a generous overview of an attractive (if skinny for its age) body of work. Personally, Rollers Show, Dose of You, You Make Me, My Heart Hurts, Mess Around With Love and God’s Gift to Women would make my double dozen. The double-disc Quiet Please (released in March 2009) does a better job of sorting out the chaff, though it gives his later work equal weight and I probably wouldn’t. For a formal introduction to Nick Lowe, I’d start with his first two records and the lone eponymous Rockpile album; they’re the best things he’s done to date.

Ever since the iPod iGeneration clambered out of the primordial pool and into their individual ovoid chambers of onanistic insularity, the greatest hits compilation finds fewer wooers and flirts only with extinction. If you decide you need 25 Nick Lowe songs in your digital library, Basher provides guidance and a perceived savings (versus an arbitrary but enforced value of $24.75). Despite an even more generous helping on the double-disc Quiet Please, I fear a future where RIAA agents dressed in brown shirts go rifling through CD stores (should such an animal still exist), pulling out discs with more than 16 tracks and tossing them into two hundred and thirty-two degrees of self-immolating celsius.

In order to prevent that future, I would humbly suggest the following. Point the first, single-song digital downloads should be relegated to singles, not every album track. “Cruel To Be Kind” is worth a dollar by its lonesome; the Abominable version of “Heart” isn’t. Point the second, record companies should send copy-protected CDs to state (and college) libraries for free. Any money the labels make by forcing libraries to buy discs is easily offset by the number of people who download songs from borrowed library copies. Point the third, tell Ticketmaster to go f**k itself. Independent music venues and/or booking agencies have the wherewithal to sell concert tickets and should be making the concerts more affordable and more profitable for the artists and their representatives. There is no earthly reason why people should pay a $10-15 surcharge for an online transaction; even Bank of America doesn’t suck the buck that hard.